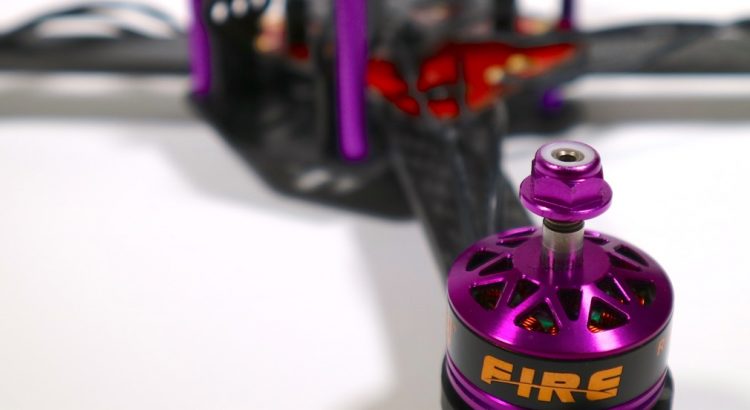 I’ve had a whole bunch of 200-250 sized quads that I’ve build, and all of them have been your standard H-style.  It’s not a bad thing, they are great flying quads, and the install is pretty easy.  That said though, I’ve always fancied flying more of a “proper” X-quad, so having a look through the Banggood.com website I noticed the Martian III frame.  The design looked interesting, so I thought I’d take a punt on it and document my build here – looking at any issues along the way, and explaining some of my reasoning.

In this first part, I’ll show the equipment I’m going to be using, and we’ll see how the frame goes together.  Most of the parts are newly ordered, but I’m going to reuse a few bits of kit I have spare… although if it turns out not to perform as I want, it’ll get swapped out.

The Martian III, the 220mm version – they also do a 190mm and a 250mm version – arrived in a very boring box, and just looks like random pieces of carbon fibre and screw.  More about this later when we put it together

For the motors, I decided to re-use some I’ve had kicking around in my spares box for a while.  These are the DYS Fire 2206-2600kv motors.  They are powerful beasts !  The only reason I haven’t reused them earlier in other builds is because they pull more amps than the normal ESCs I’d use, so haven’t proved particularly suitable.  These were originally given as a review product form GearBest, but as they seem to be refusing to speak to me after one of their review products broke, I’d suggest getting them from Banggood instead 🙂

So this would mean I needed some new ESCs, I like trying out new products, and so I picked up a 4 pack of Racestar 28A ESCs.  They run BLHeli_S and support Dshot, so sounded up to the challenge.  I also liked how the product came, each ESC come unsoldered and without any heatshrink, but they are shipped with wires to solder on, clear heatshrink and even labels to add later.  The design reminded me of the KISS ESCs, which can’t be a bad thing 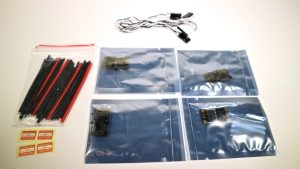 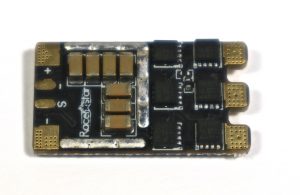 For the flight controller, I chose an Omnibus F3.  I recently review the F4 Pro – which I found slightly overkill with it’s current sensor, and the F3 board was also particularly cheap.  Two things I really like about the Omnibus is that it’s got an onboard power regulator, so I don’t need to feed it a separate 5v input and, of course, it has the build in OSD.  and it’s good to be able to fiddle with PID settings, as well as always knowing your battery voltage. 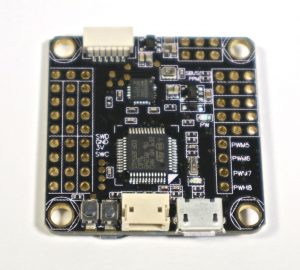 Next up was the VTX decision.  I’ve actually got 4 or 5 VTX’s in my spares box, but with the restricted room on the X frame, I was trying not to have to squash things in too much.  Having recently been flying absolutely wonderful micro brushless quads like the Aurora100, I could see how well a stack of boards over the flight controller could work, so I found a product called the Rush VTX V1.1  It’s a 40 channel VTX with switchable output power between 25mw/200mw/500mw, and comes with the mounting holes aligned to mount over a flight controller. 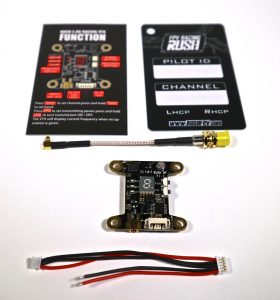 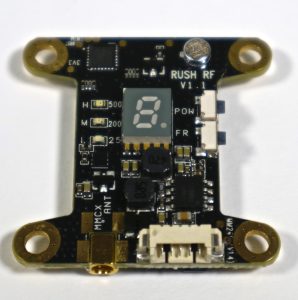 As far as cameras go, I had a few options… and I may well try both.  I have an Akk-Tech CA20, a Sony SuperHADII based CCD camera which I reviewed a few months ago.  It looks and feels very much like a RunCam Swift, os HS1177.  It has got a 2.8mm lens though, where the swifts have generally moved to a 2.5mm lens.  A much wider lens option, is the RunCam Swift Micro.  I recently reviewed this on a plane, and so I want to try it in a quad (I also have the 2.3mm lens version coming and want to compare) 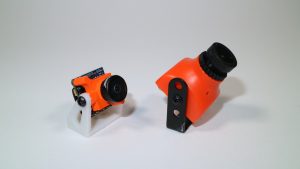 For the receiver, I’d have liked to continue the stack idea, but instead I’m going to use something I already have available and is particularly tiny.  The FrSky XM+.  I’m perfectly happy with this in terms of the range it gives… and of course it speaks SBUS.  It’s only downside is it’s lack of telemetry – which I often find a useful way of finding a quad if it’s gone down somewhere in the middle of a field of long grass. 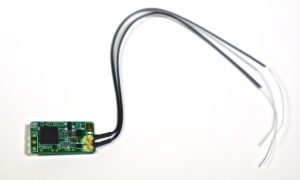 That’s the kit I’m intending to build with, so lets get the frame out of the box and see how it goes together.  The frame parts are mostly carbon fibre, but as it includes the red PDB board, it also has a piece of G10 to act as an insulation layer so it doesn’t short out on the carbon.  As per normal, we get a seemingly random collection of screws, bolts, and risers. 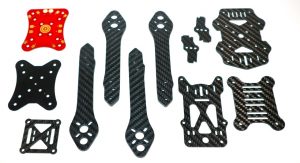 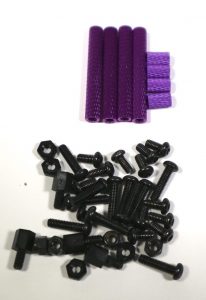 An XT60 is included with the PDB board, which is a nice touch – although it should be noted that the PDB itself is nothing special.  There’s no power regulation here, quite literally just a board to connect your ESCs to your lipo.  The risers deserve special mention as well – if you’ve ever struggle to hold onto one to get a screw in tightly, only to have it slip in your fingers.  These risers have a texture cut into them, making it easy to hold onto and get the screws in nice and tight. 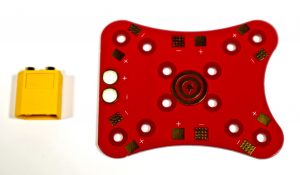 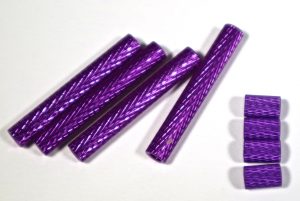 We do get some instructions, but I have to say it’s just not that clear.  It took me a few tries of putting things together in different ways before I figured out what I think they meant to say.  For this reason, I’ll add a few more pictures in the way I think you need to connect the arms to the main frame. 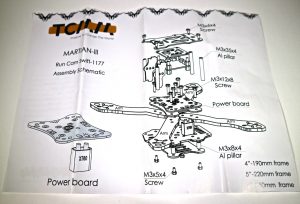 The legs come together to form a single join.  Place the G10 insulation layer on top of the legs – lining up the holes, and then place the PCB board on top of that.  Add 8 of the long screws included with the kit in the middle 4, and outer 4 holes.  These go though the PDB, insulation plate, legs, and out of the bottom plate.  This effectively sandwiches the legs between the PDB and the bottom plate. 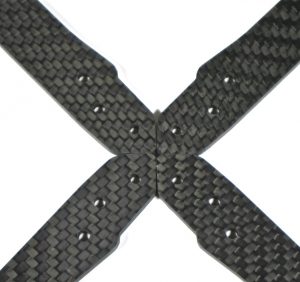 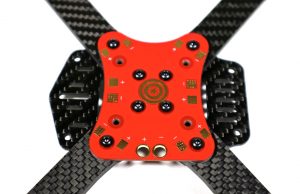 If we now flip the quad over, we need to add locking nuts to the 4 middle screws, and the 4 short risers to the 4 outer screws.  Next, take the 4 remaining long screws and put these in remaining holes so they protrude out of the top of the PDB.  Then screw the plastic risers on to these, mount the flight controller plate, and finally secure with the plastic screws.  In reality though, I’m not sure why we’d want an extra carbon plate here – I’m thinking I’d just mount the flight controller here, but we’ll see at build time. 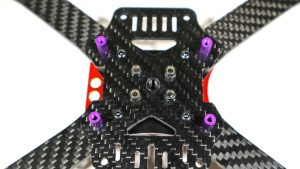 The rest of the build is more obvious at this point.  The lipo plate attaches to the small risers underneath, with the outer holes on the bottom plate getting the large risers so as to mount the top plate on them.  Before we do that, don’t forget to mount the camera plates.  These are designed to allow a regular RunCam Swift or HS1177 style camera to be screwed to them at a few different angles.  They aren’t structural, so if we are using a different camera, then not an issue. 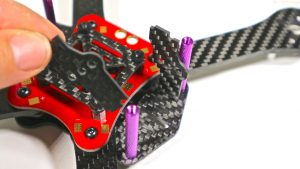 Ok, the frame is put together, it’s quite nice looking I think, although not particularly light, and not a true X.  Whilst the motor-motor size is indeed 220mm, the measurement between the 2 front legs is approx 170mm, while between the front and back legs is approx 140mm.  So a stretched X I guess. 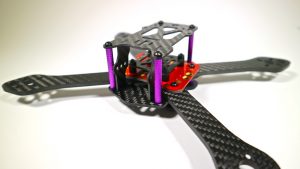 Join me in part 2, where we’ll do the necessary building and soldering to get this quad ready to fly.