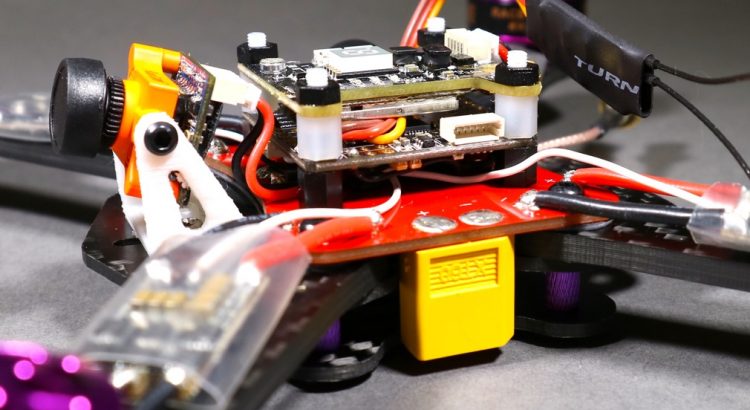 In the first part of the build, we discussed the parts I gathered to build the Martian III, so let’s actually get on and put it together now.  First off, this means disassembling most of the frame down again – just leaving the legs and the base plate – I’ve done this so I can test fit the flight controller with the VTX sitting above it. 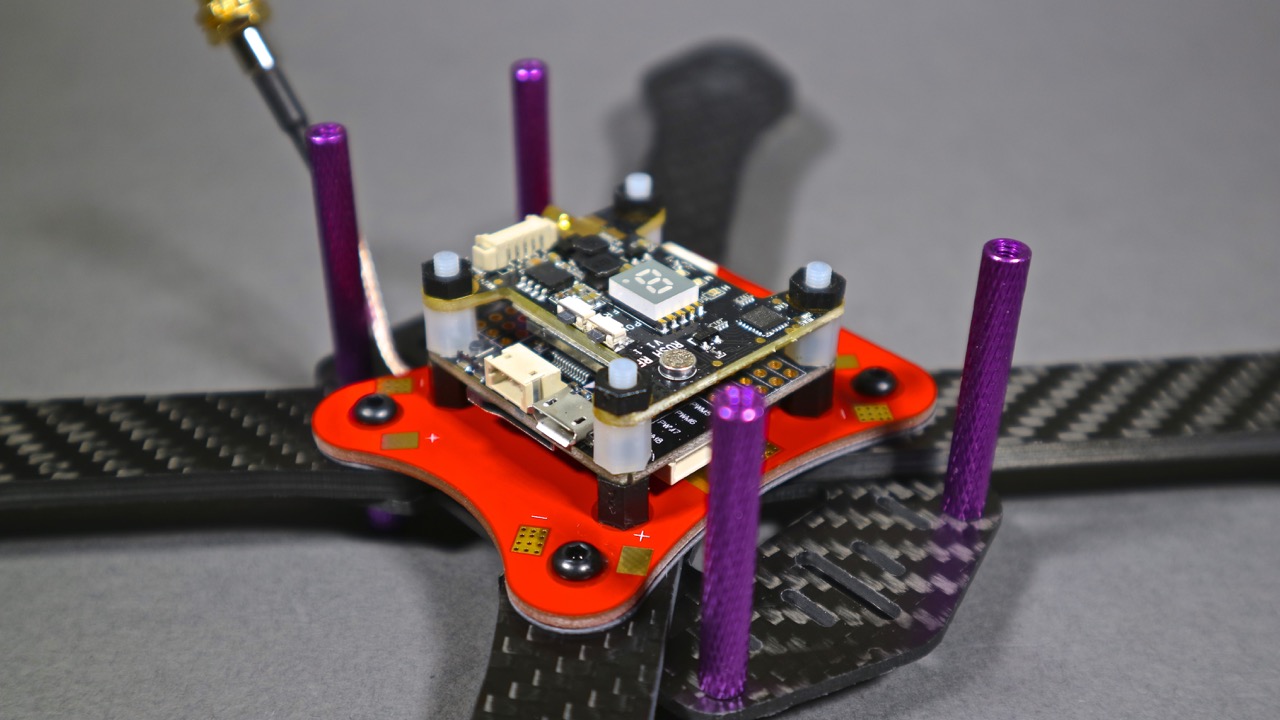 I still don’t understand what the little carbon plate that fits here is for.  You wouldn’t want to put it where it can touch any electronics as carbon is conductive.  Perhaps it’s intended as an extra layer of protection that will sit on top of the stack.  In this configuration, I want to be able to see the LCD of my VTX, so I’m leaving it off.  You’ll notice here that I’ve added an extra standoff in order to give me plenty of separation between the components, whilst making sure it’ll sit comfortably within the frame space.  I picked up a box of these standoffs from banggood (although they were out of stock of black at the time) very useful, and close to essential in building any sort of quad. 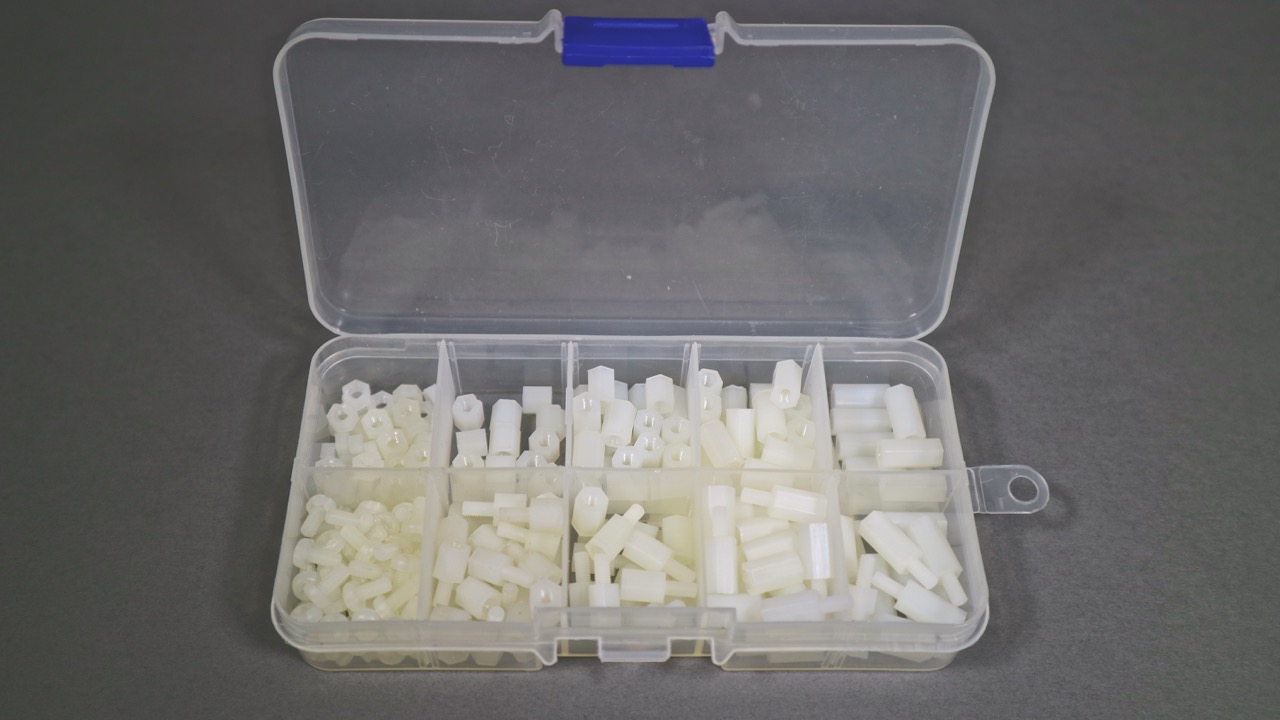 Next up I mounted one of the motors, and placed one of the ESCs on the arm approximately where I would want it to sit.  This gave me a good reference point to where I needed to cut the motor wires ready for soldering. 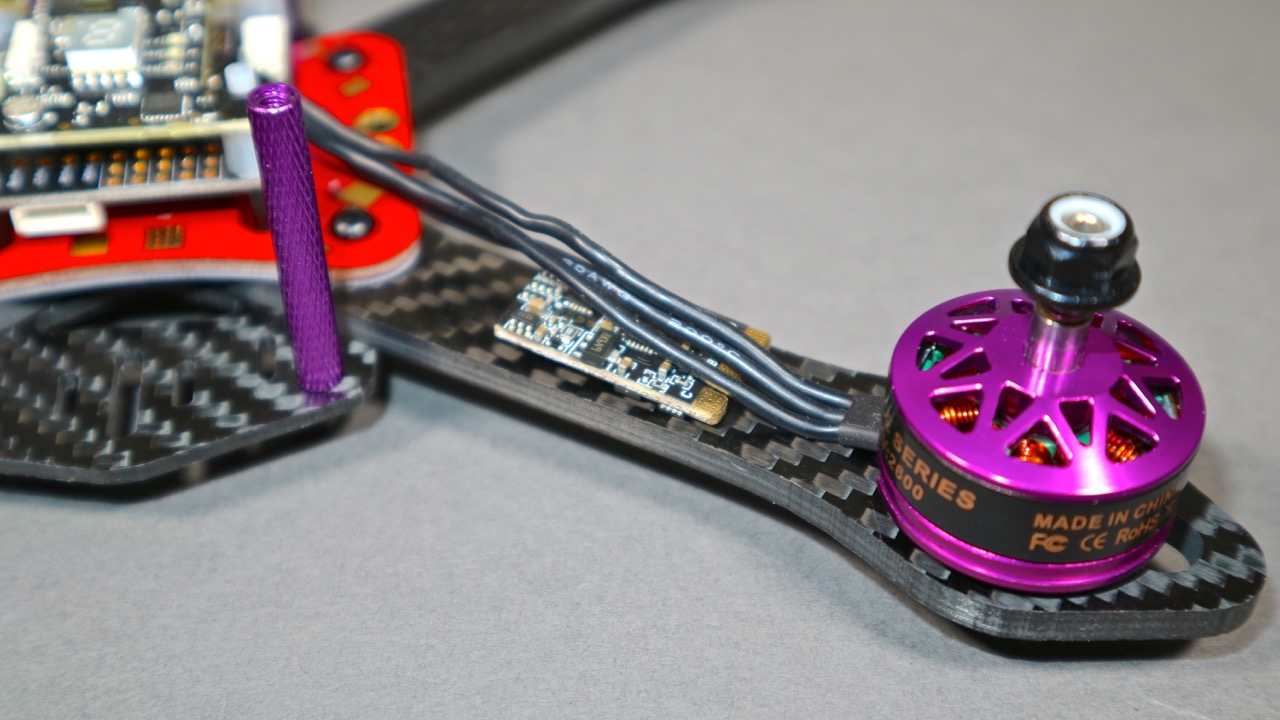 Time to start soldering.  I started with the PDB, first tinning all the available pads. 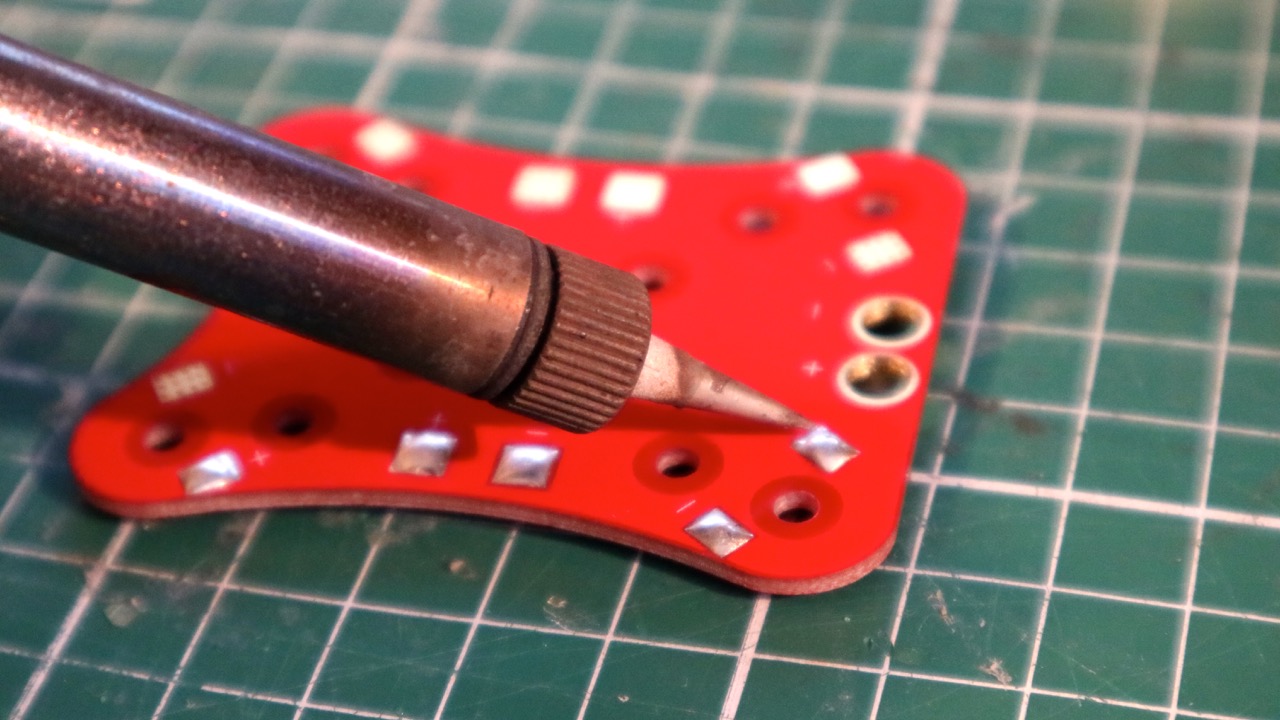 Before soldering in the XT60 connector.  One tip here, if you are new to this and find your XT60’s sometimes melting with the heat of the iron going through the metal contacts, is to connect it up to another XT60 of the opposite gender.  This will distribute the heat out more and avoid it building up all in the one place. 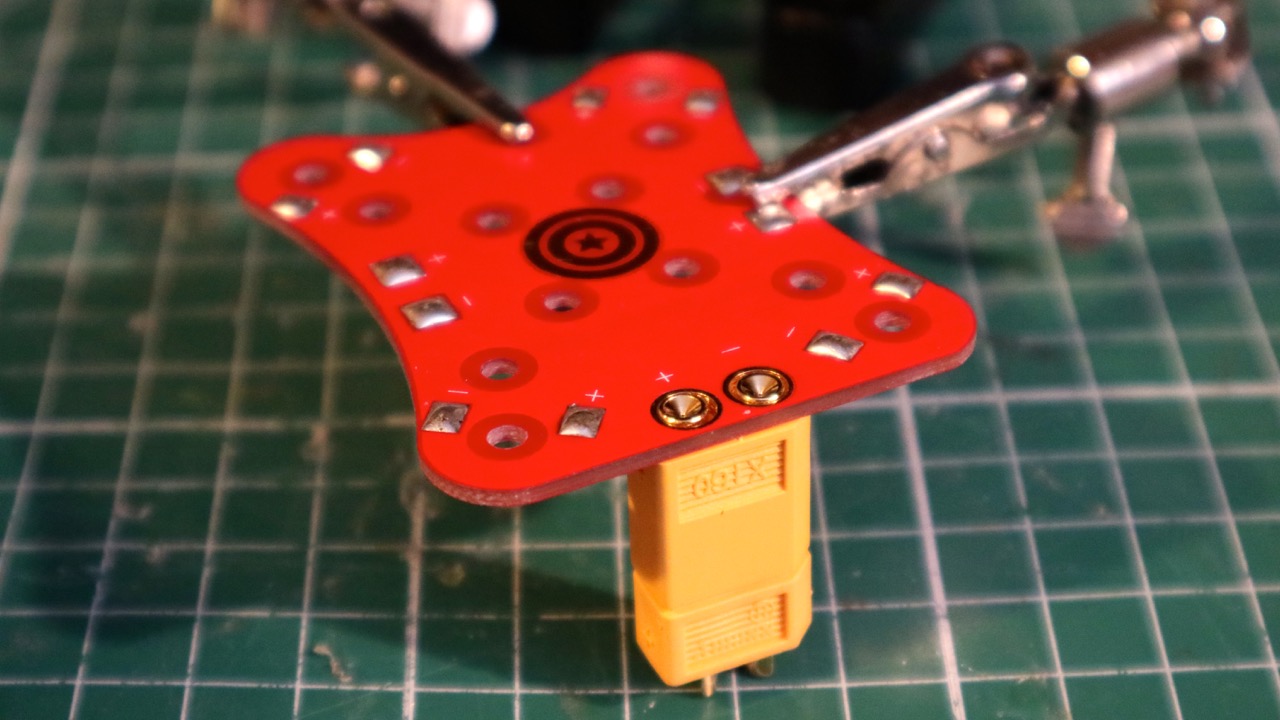 With the PDB finished, I tinned up all the ESC joints, cut the motor wires, tinned the end of those – and finally tinned up the included ESC signal and power wires.  These actually came pre-tinned, but I redid them as I wanted to make sure that all the solder I used was the stuff I put on, so I could be confident of it bonding to itself. 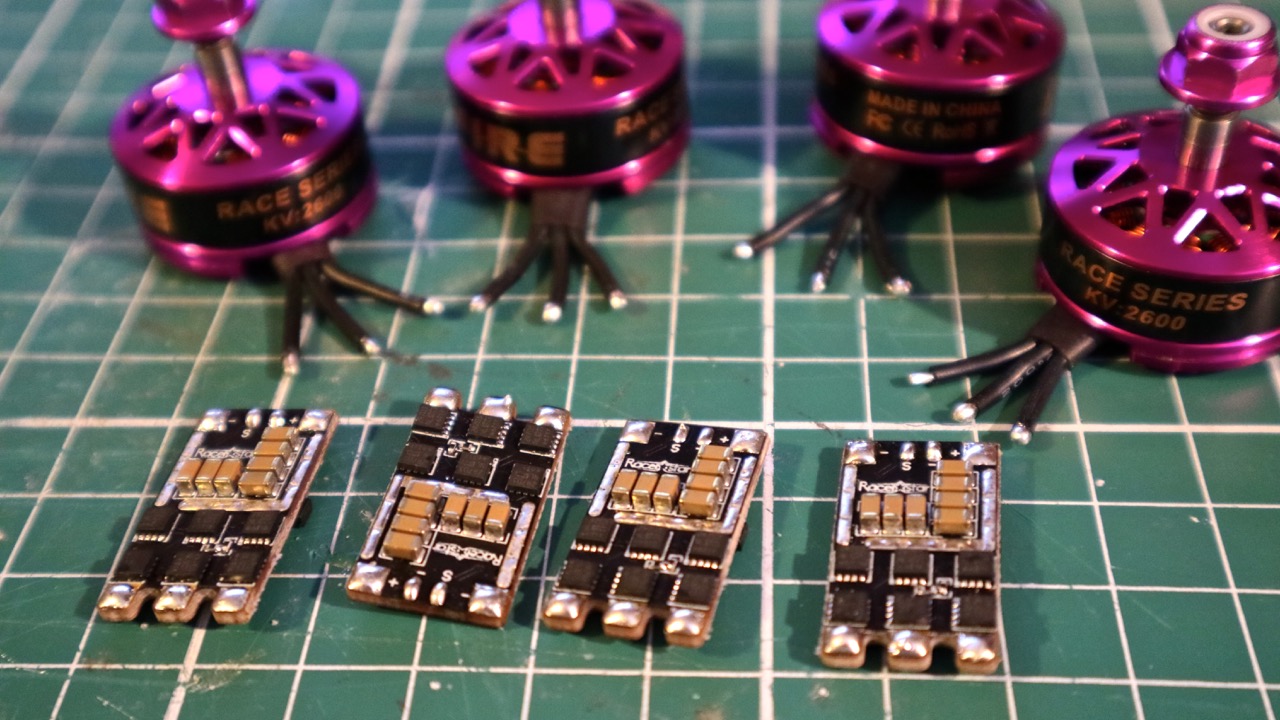 Then I soldered the motors to the ESCs, along with the power wires and the signal cables.  You may recall from the pictures of the ESCs that they shipped with ground/signal wires in a servo plug.  There are also ground pads on the ESCs alongside signal pads to connect them to – so why haven’t I used them ?  Well, I don’t really see the point – this quad will be running through a single lipo, and so the ground connection from the PDB will be common with the ground pad on the ESC, which will also be common with the ground rail on the flight controller. 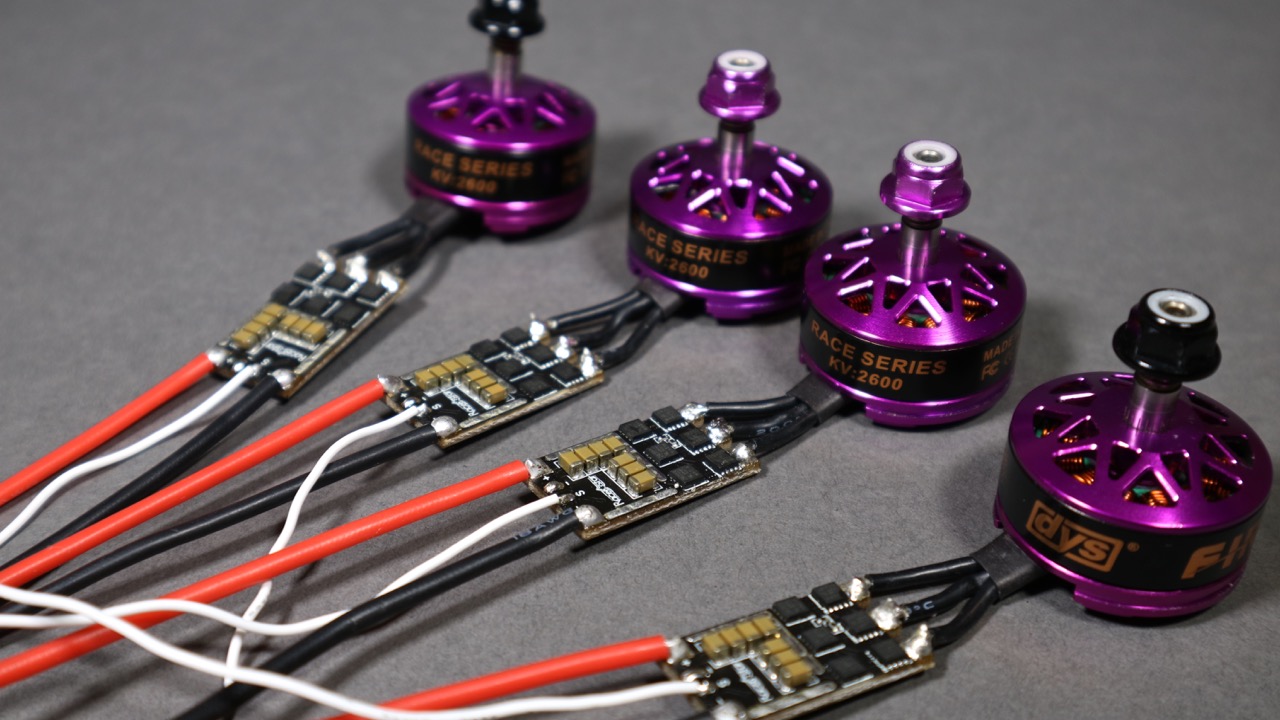 I’ve done just about as much as I can with the ESCs on the bench, so now it’s time to attach the motors to the frame so we can see where we need to cut our power wires.  It’s important to remember to also add the heat shrink at this point, because you can’t add it on after you solder your first connection !  In the picture you’ll notice that I’ve added the heat shrink, but I haven’t actually shrunk it in place yet – this is in case I’ve hit a problem and need to resolve anything on the ESCs.  I’ll heatshrink these on once I’m happy that everything looks good. 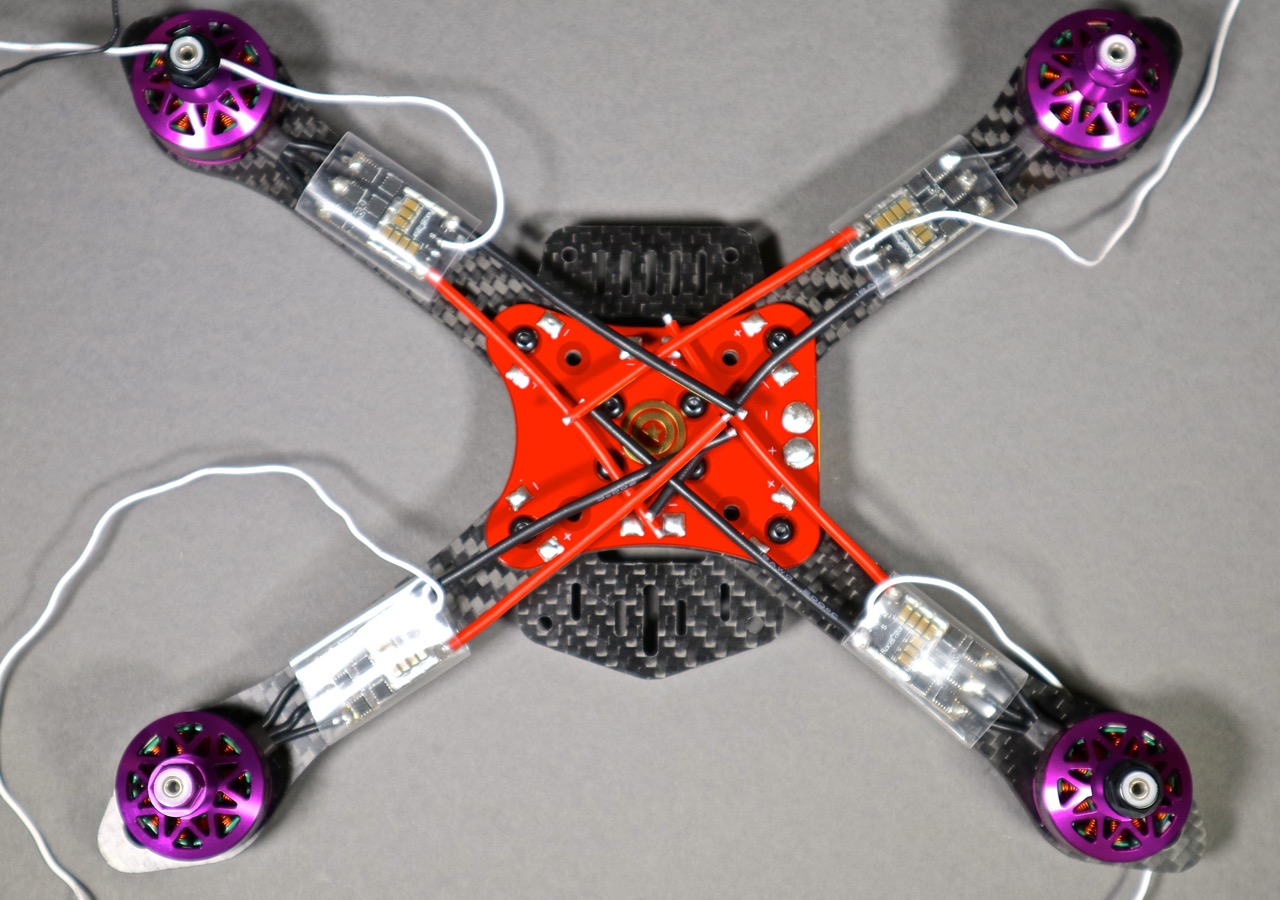 The ESCs power wires, are cut, tinned and then soldered onto the PDB with just the signal wires to take care of now.  The soldered in XT60 connector is on the left of this picture and faces downwards.  We are also left with two sets of extra ground/voltage pads which we will make use of to connect power into the flight controller and VTX. 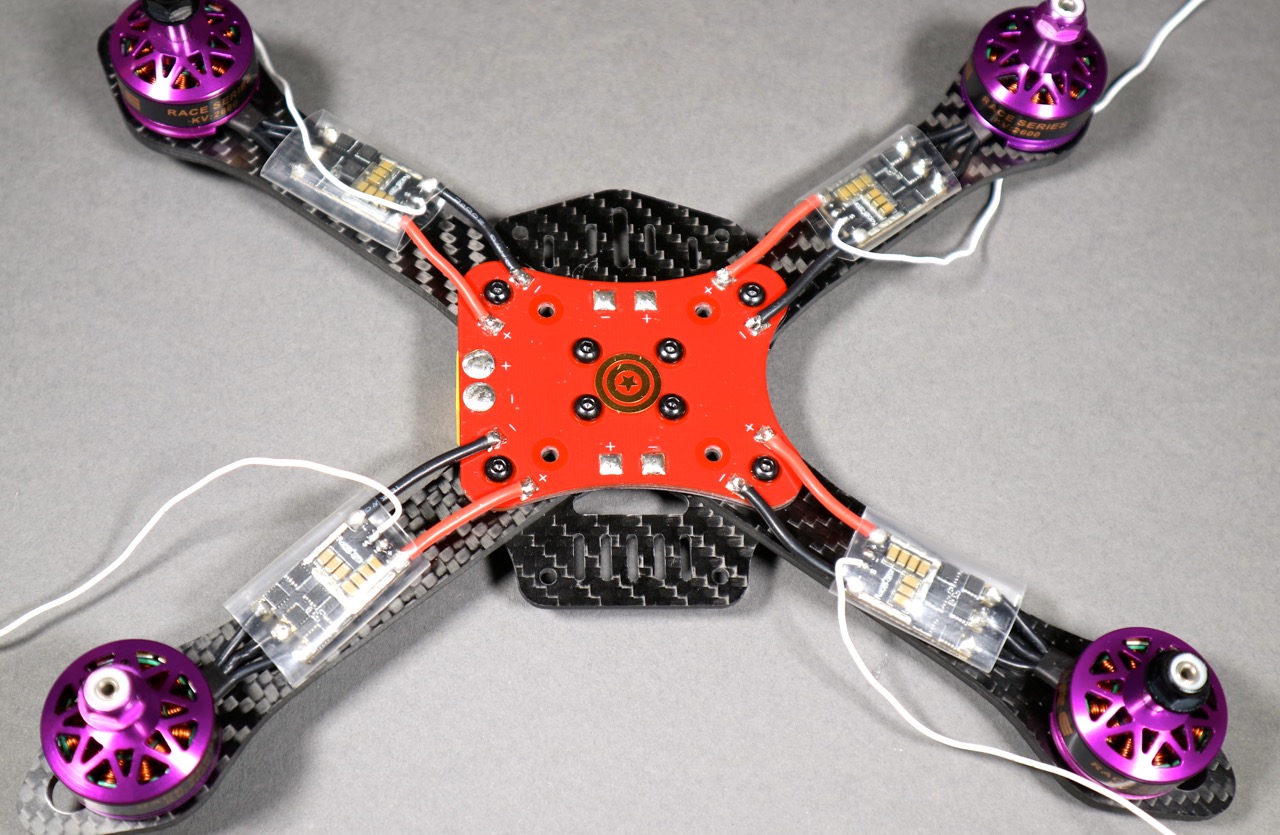 At this point, I realised I’d forgotten to mention another part I’d be using – which I should have added to part one.  It’s something I always forget when I’m thinking about what parts make up a quad, but it so important – especially in my flying (and crashing).  It is, of course, the beeper.  I tend to buy these in packs of 5, which come with attached servo connectors, and then cut the cable to suit, but there are lots of other options available. 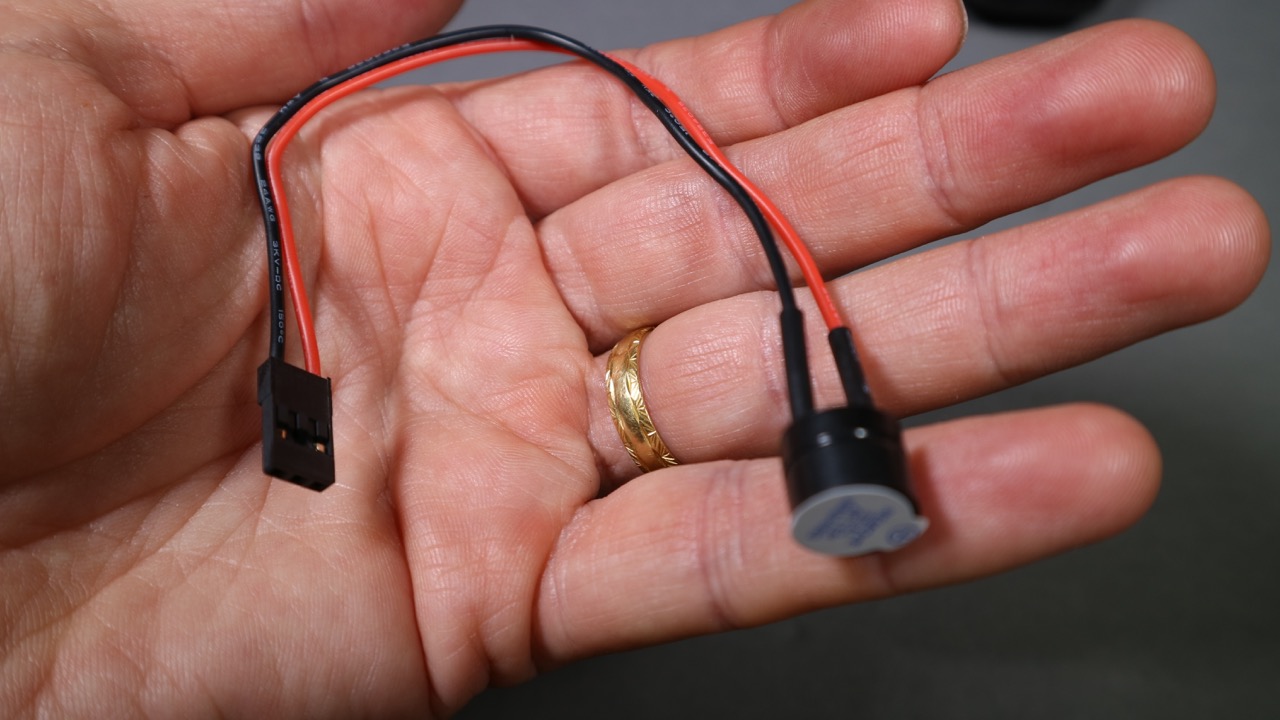 The Omnibus board is not particularly well labeled, and I was going to be doing a few non-standard things, so I think it’s worth labeling up what I’m going to be connecting to.  For me, at least, I always find things a lot easier actually going through this step of drawing a little picture.  It’s as useful for seeing all the stuff you don’t have to do, as well as the connections you do need to solder.

And the good news is that there’s not much in the way of work to do here.  We need to add the SBUS connection from the receiver (outer pins are ground, inner are signal), connect the four signal wires from the ESC’s, add the buzzer, the VBAT connection (from those handy solder pads just below it) and finally connect the video in and out. 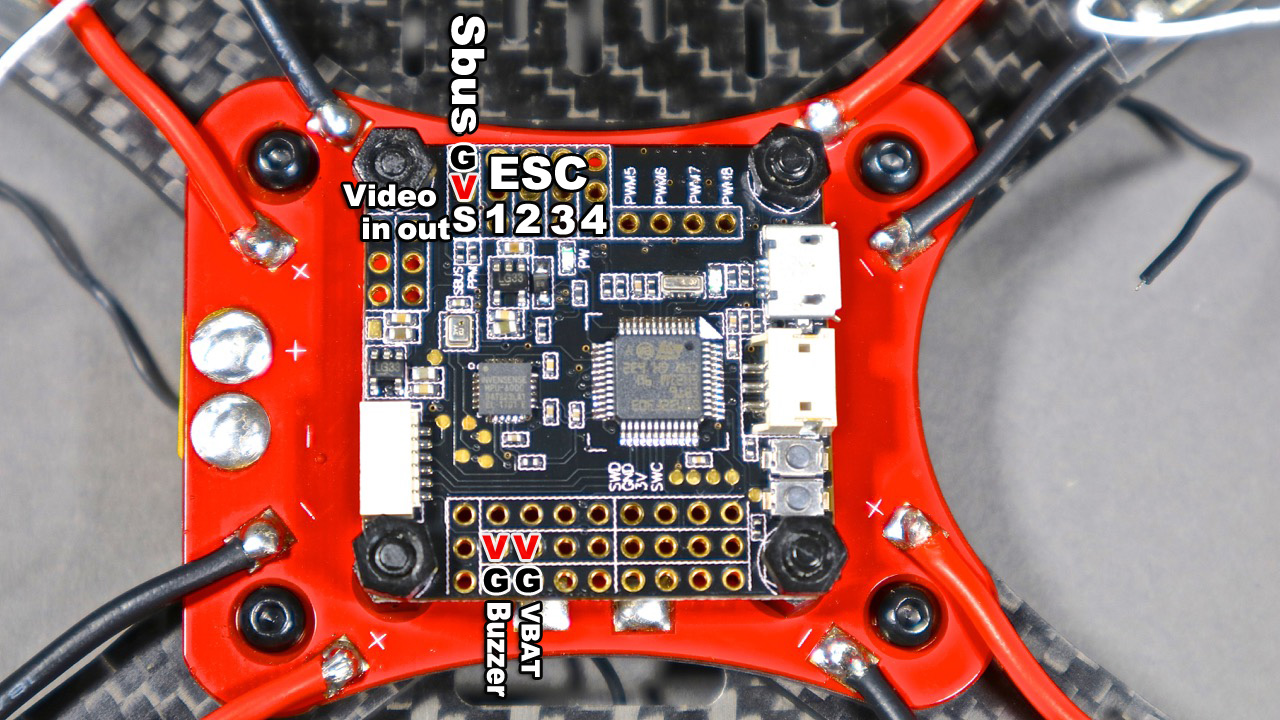 If the video connection looks a bit weird here – the fact that I’ve only labeled the video signal pins, and not the ground or voltage.  This is one of the places in which the Omnibus does seem to try and make life confusing.  You solder together one set of jumpers (the two pins on the bottom right of the picture) and the camera voltage pins will put out the battery voltage.  Miss out that very last pin on the right and solder the two next to it, and it’ll put out 5v.

I don’t find either of the two all that useful.  If I was running a VTX and a camera from it, then I’d really prefer a 12v regulated output.  As it is, 5v is normally fine for the camera, but rarely do we fund a VTX that works off of 5v, and despite many devices saying they tolerate a higher voltage, given the way the voltage spikes up and down with the way we fly – I’d prefer something regulated.  So how am I powering the VTX and camera ?

The VTX has it’s own onboard regulators and *looks* like it will do a better job here that the flight controller (but I will reserve judgement until after I’ve flown it)  If you take a look at the included cable (below), it has power cables to connect directly up to the lipo (the last of the two remaining solder pads)  and 5v, ground and signal connections to a camera.  The connector fits the RunCam swift/HS1177 and most of the PZ0420 derivatives.   Have we finally hit upon some sort of standardisation with FPV cameras !

We do complicate this nice clean cabling a bit though, as to get the OSD on our picture it means we need to take the signal line from the camera into the flight controllers Video In, and then go from Video Out to the VTX.  So I should be able to accomplish this by simply cutting the camera signal wire from the included cable in half.  Attaching the camera end to FC video in, and the VTX end to FC Video out. 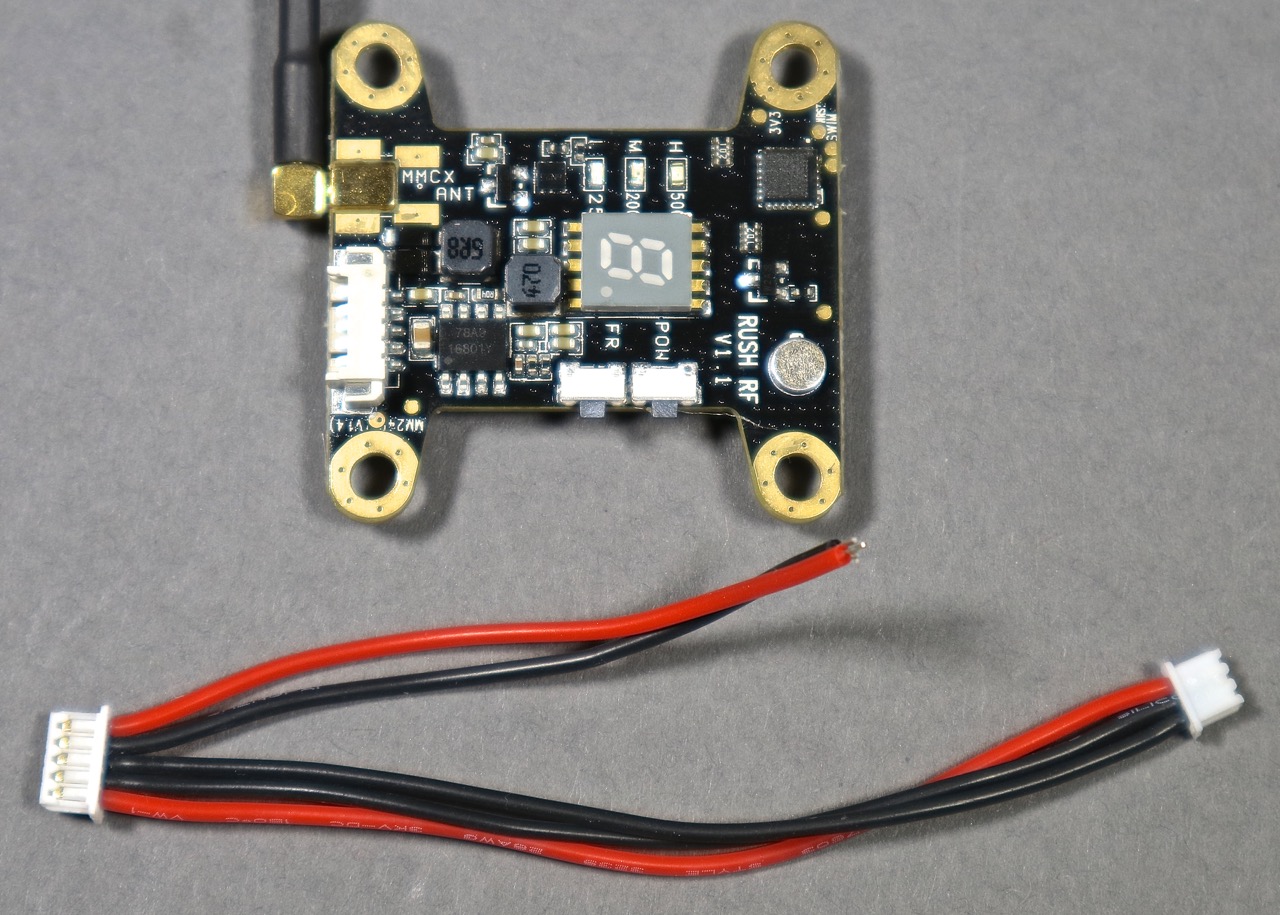 It looks a touch chaotic, to say the least, but what I did was as much work as possible away from the frame so I didn’t feel any space constraints.  I routed the wires to the underside of the board wherever I could so it would look neater. 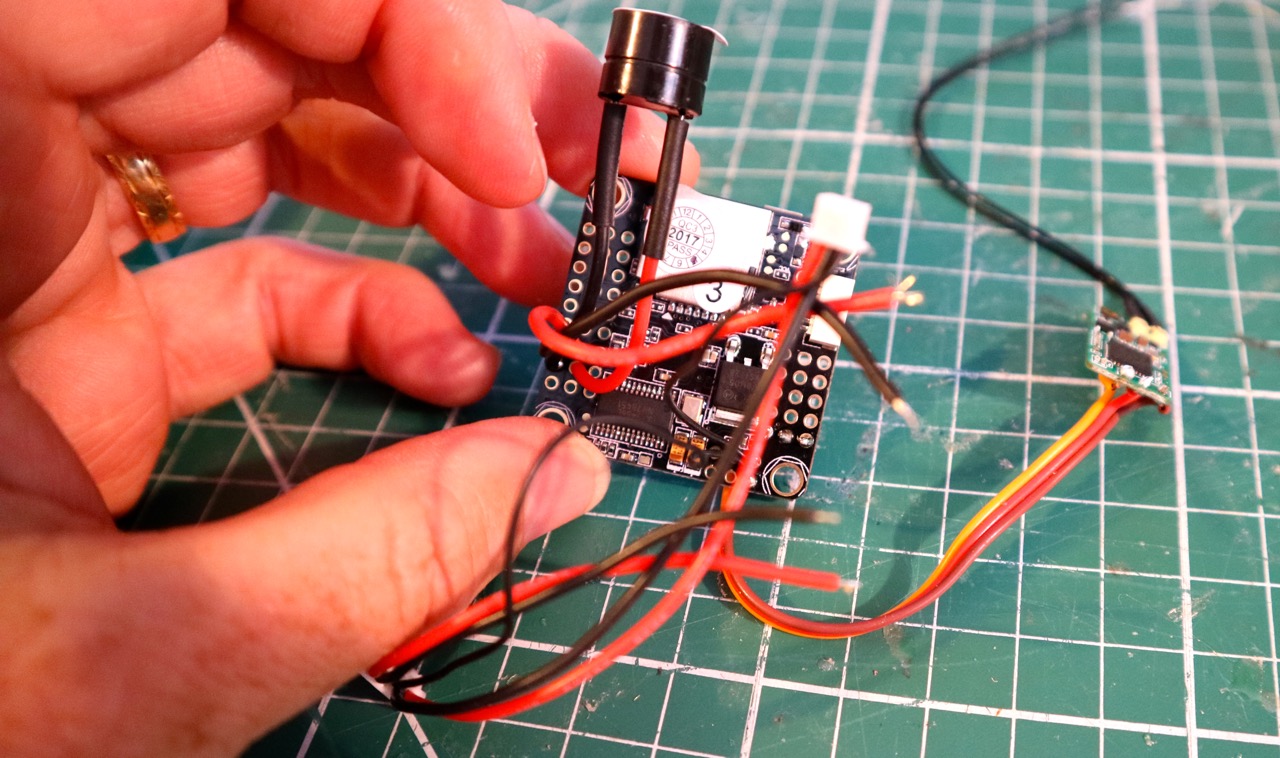 Once the solder joints had been made, the flight controller could be secured with the risers and then the wiring tidied away underneath the board.  At this stage you’ll notice we have the camera connector coming out of the front, the VTX connector at the back, and the beeper coming out through the side (which I choose as the sound wouldn’t be blocked and also meant I wouldn’t have to secure it any further.  Before I connected the XM+ receiver, I went ahead and flashed the latest firmware (I have a video on how to do this here), and used the variant with RSSI on channel 8.  Although the XM+ isn’t a telemetry receiver, we will be able to get the RSSI signal this way via the Betaflight OSD.  At this point, the receiver is just flapping around in the wind and needs heatshrinking. 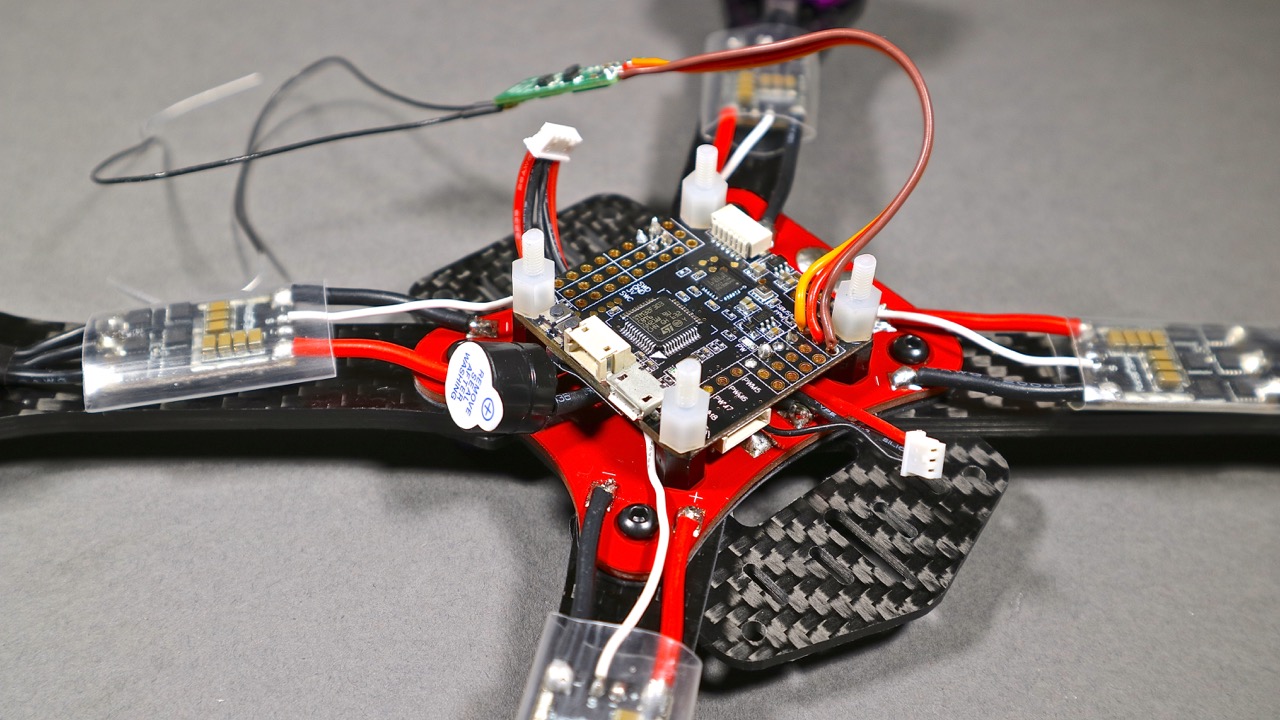 I added the heatshrink to the receiver (I had already bound it at this stage – as it’s tricky after it’s heatshrinked) although I’ve no final decision where it’s going to go in the frame.  I added the VTX board, secured it with the nylon nuts, and plugged in it’s cable.  I also added the RunCam Swift Micro camera so I could continue my review piece on it.  The Micro is too small for the normal mounting, so I downloaded a design from thingiverse that fitted the bill and printed it out.  Finally, I added the battery plate to the bottom of the frame. 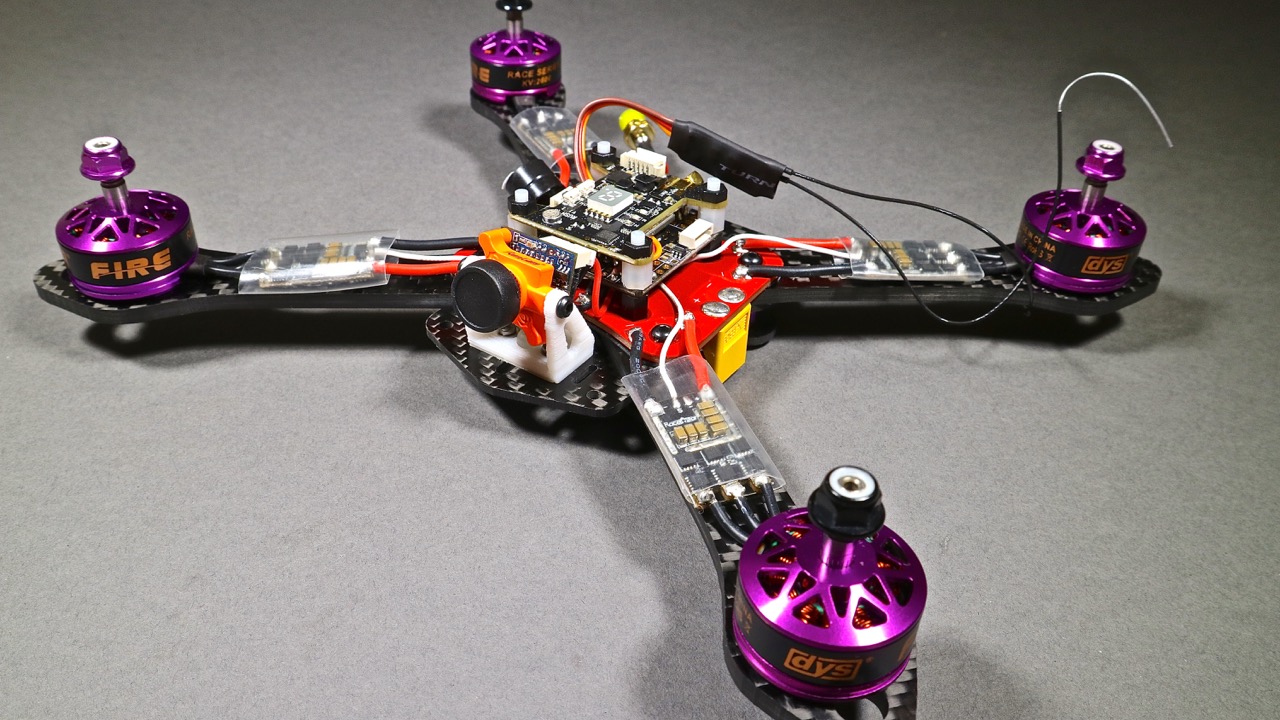 Before putting the top on, and shrinking the ESC heatshrink, we need to do the Betaflight config, and see if there’s any motors that need reversing via Blheli.  Join me in part 3 – the final build installment – where we’ll go through the config steps, finish off the build and see if it flies !