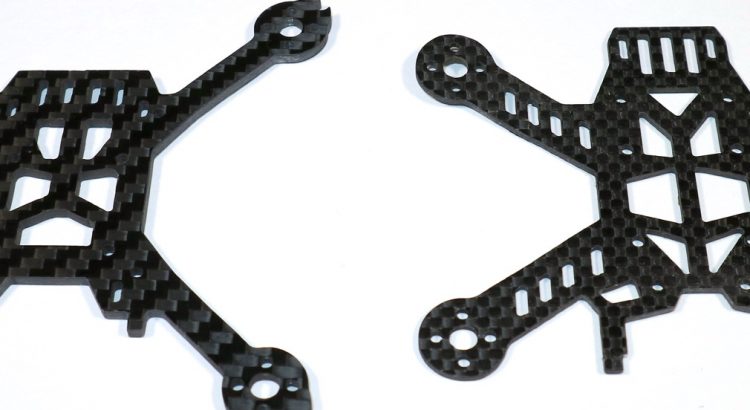 The Aurora 100 has become my favorite quad, after getting one sort of out of the blue from Banggood to review…. and that’s not just favorite micro quad, I mean quad of all dimensions.  I was out a few weeks ago flying with my friend Neil (he also had an Aurora) when disaster finally struck.  We were having a right old good time flying around some trees and making up a little impromptu race course using the natural hazards as gates to go through.  Then Neil hit a branch after losing video signal and snapped an arm clean off.  I continued racing away and started going through his lipos as well before I hit a branch and split an arm on my Aurora.  Disaster !!!  What would I do next ?

Well, I read enough tales of woes and comments about breaking the base plate, so I was already prepared – but instead of just getting the thicker 2.5mm Base plate, I went with a few peoples recommendations about trying a different frame.  The Firer 110. 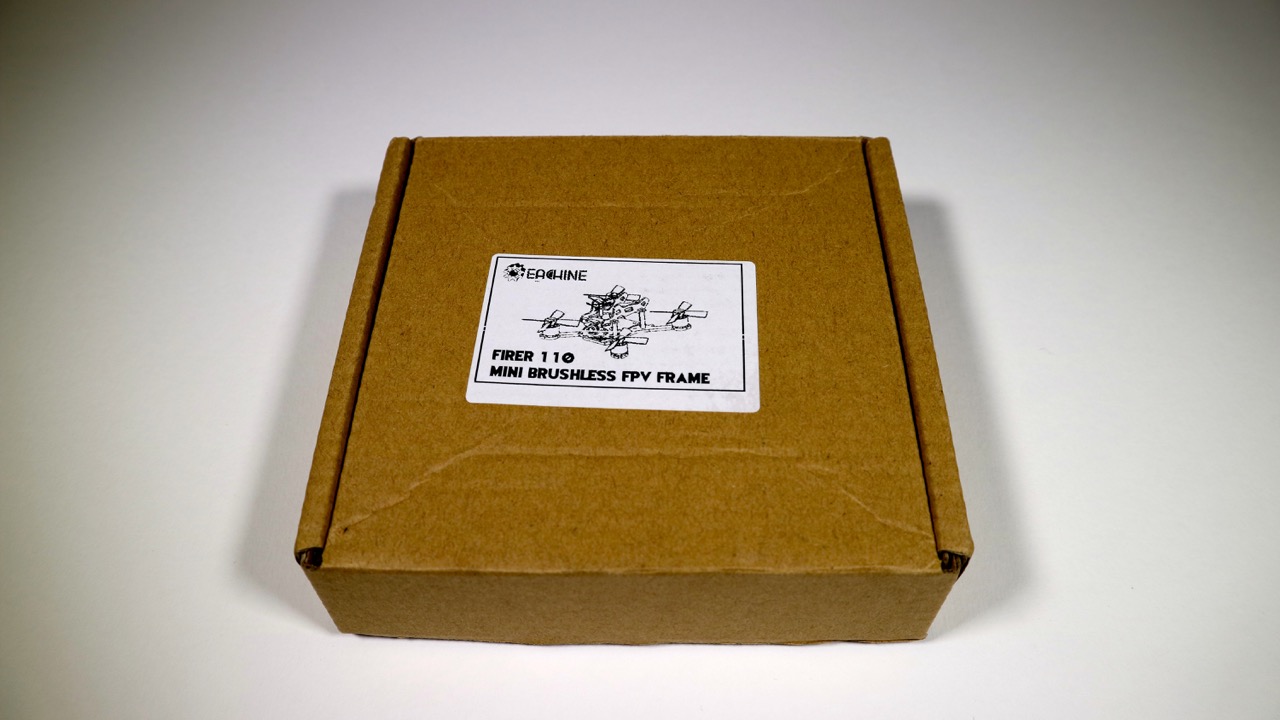 Opening up the unassuming box, the frame isn’t too dissimilar from the Aurora – they are both made by Eachine after all.  The Firer 110 though, has side plates that interconnect with the top plate for extra strength (but still retains the aluminum standoffs) 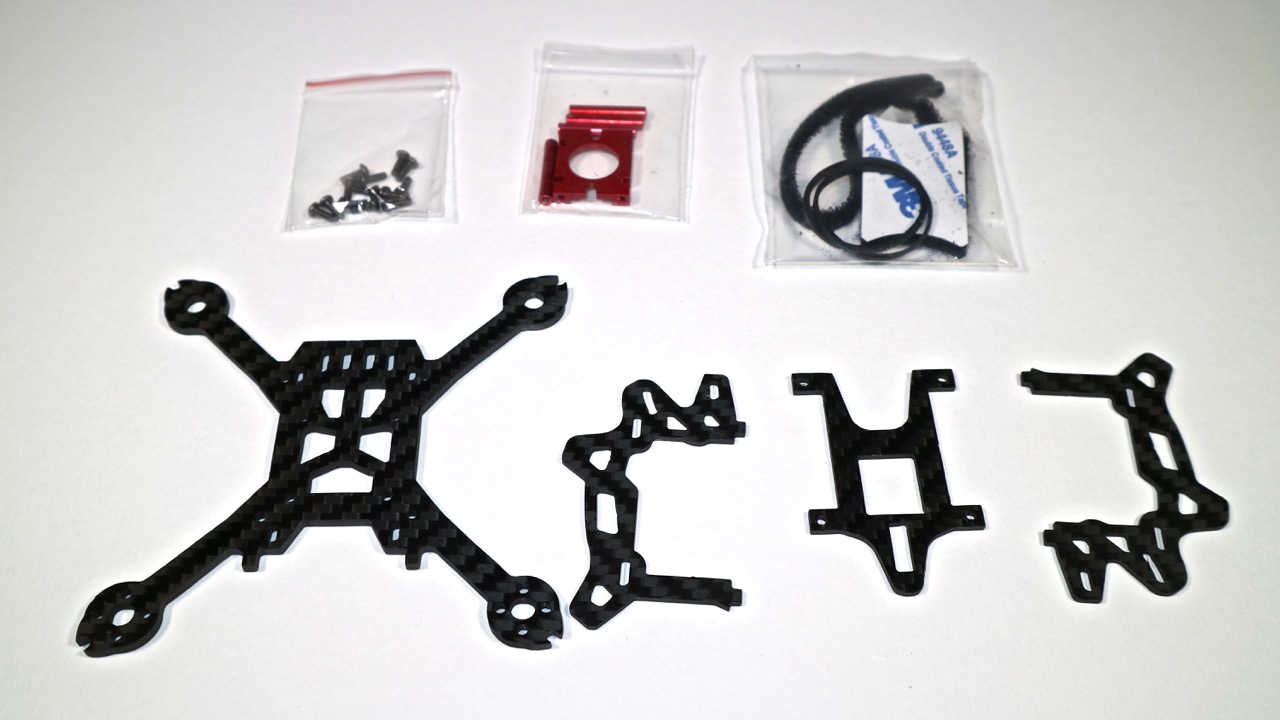 Looking at the base plates side by side though, there are some distinct differences.  The Firers arms are obviously longer, but the main base plate part is actually shorter, with the camera section being brought back and “prongs” to fit the LED on quite a bit shorter (and obviously less prone to snapping) 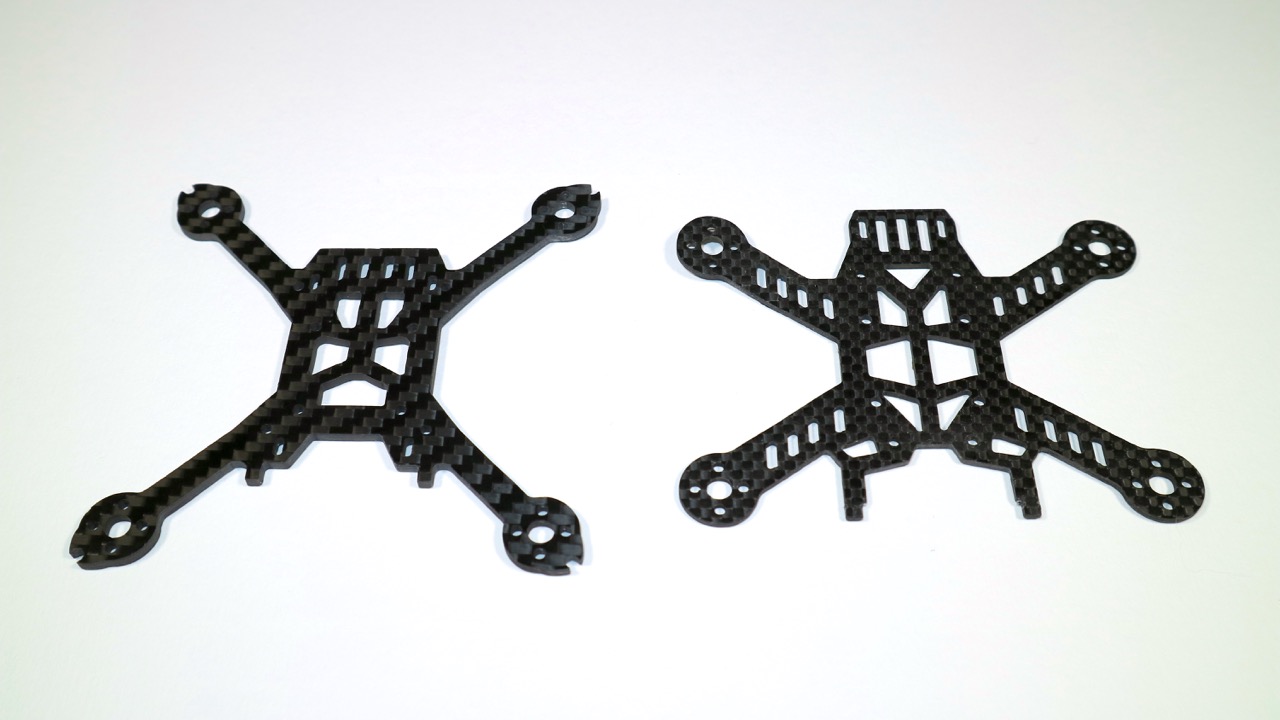 I started by removing the Auroras components, they came off in just a few parts.  The central stack just unscrewed from the bottom – as did the motors.  The camera peels easily off the piece of sticky keeping it in place, and the LED lights slide off (although require some force) 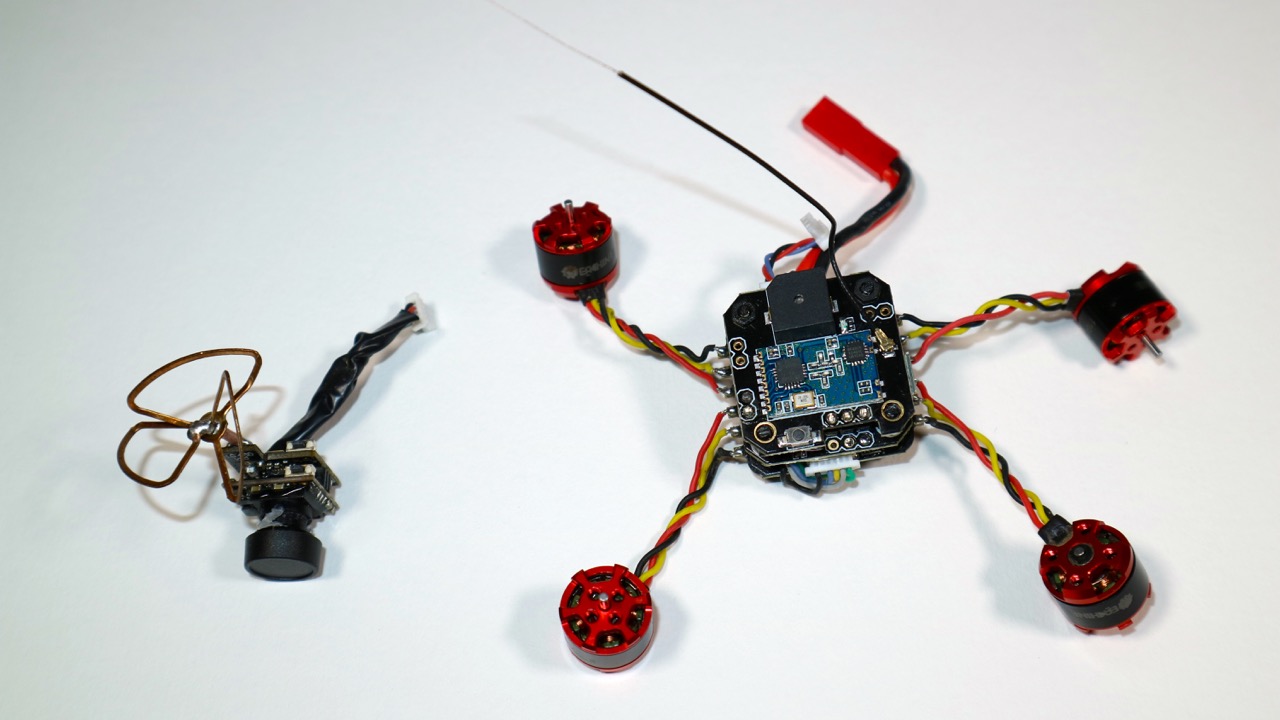 I screwed the stack into the Firer frame and checked I could get the motors to reach their mounting points. Although I could just about get the rear motors to reach, even after untwisting all the wire it was a stretch, there wasn’t enough wire to reach the front mount points.  It was frustratingly close, between 10mm and 20mm !  I had no choice though, I’d need to lengthen all the motor wires. 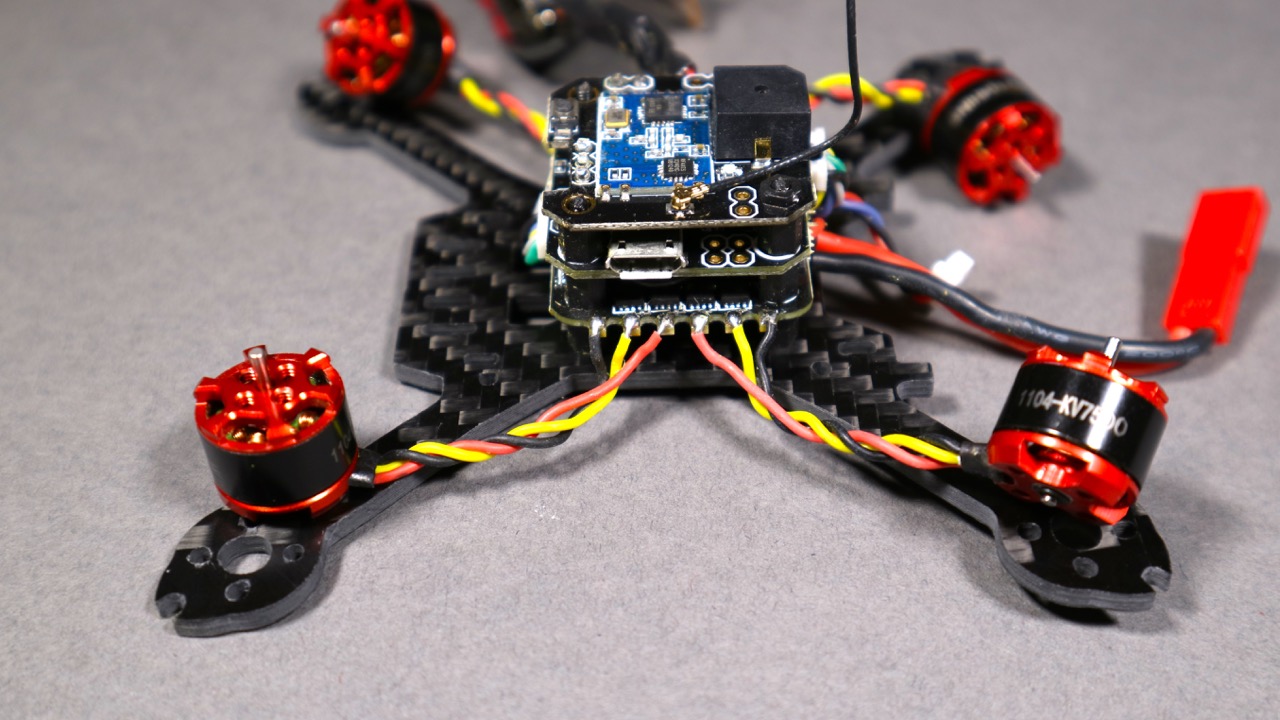 I did pick up on another problem though whilst looking at the motors.  The original Aurora 100 uses M2 x 3mm screws to mount the motors.  With the Firers 2.5mm base plate thickness, the screw was barely showing through the frame (as shown in the picture below) so I needed to order some M2x4mm screws so I’d have the same amount of thread going into the motor. 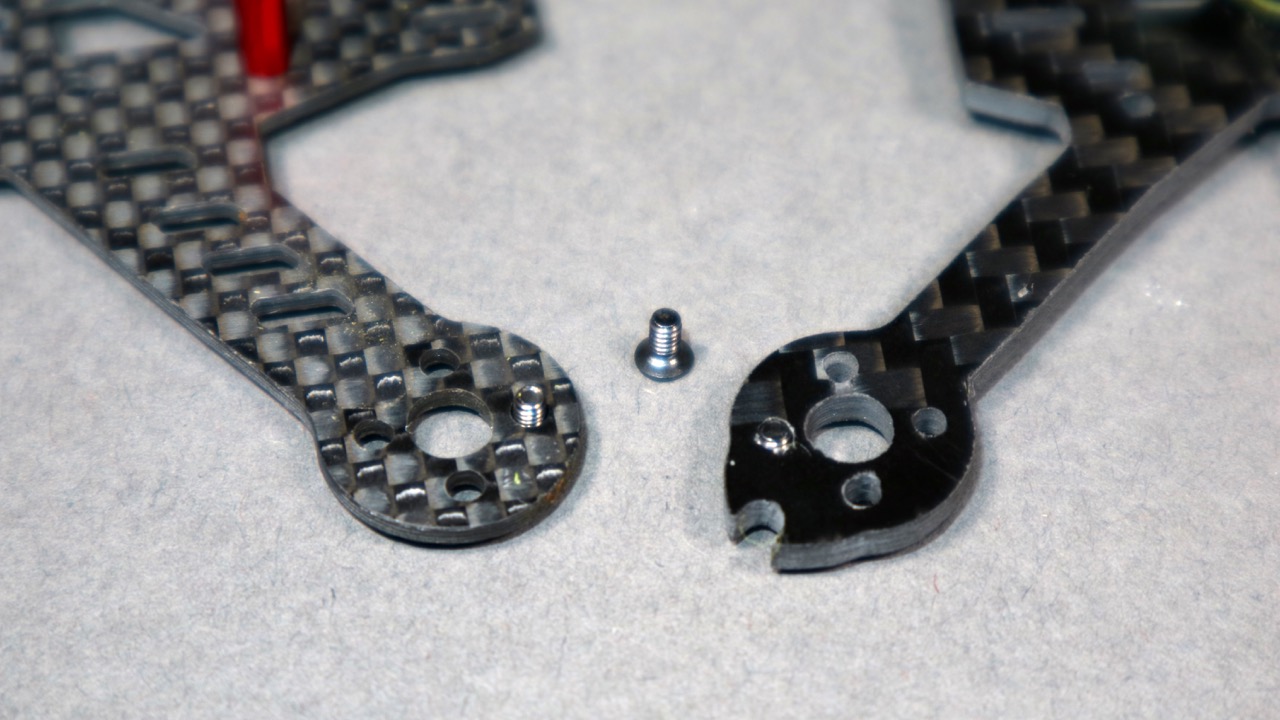 Although you can reverse motors in Blheli very easily – I thought the easiest thing to do was to put all the motors back on in the same positions using the same colour order of wire – so made sure I knew which was which.  I even managed to find the same colour and AWG silicon wire to use. 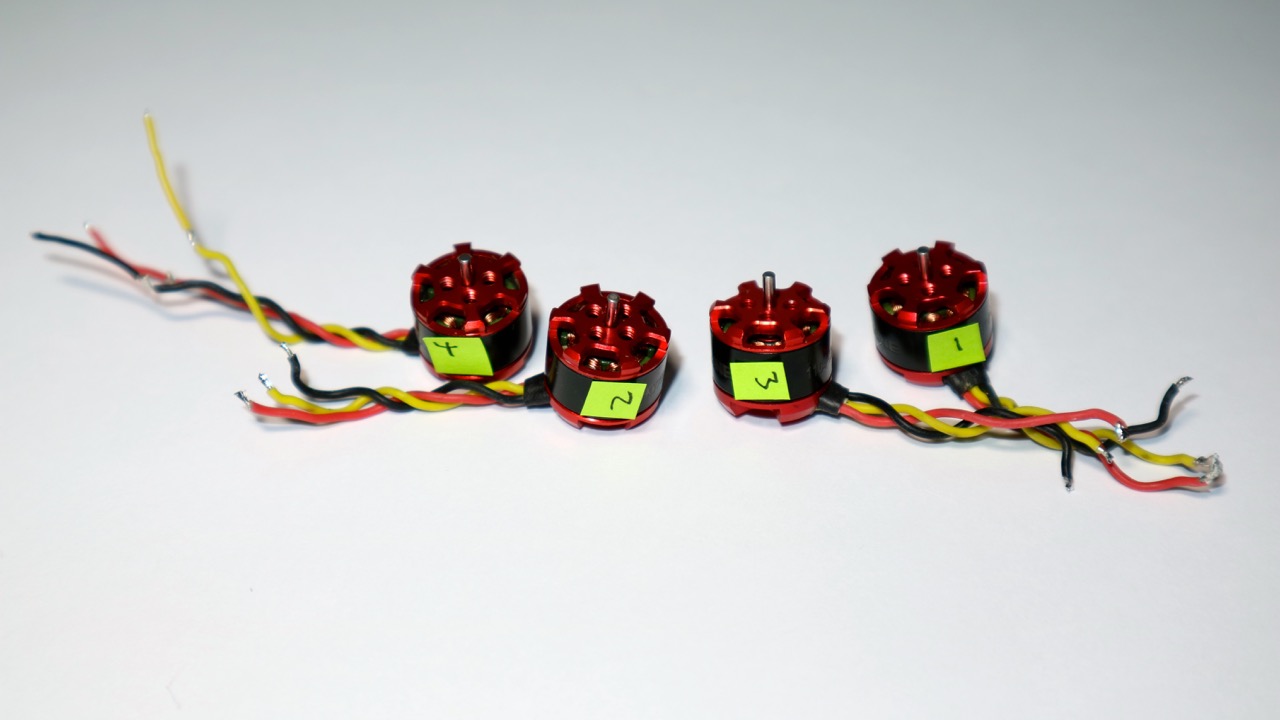 With the new screws having arrived,  and the motor wires lengthened, I could go ahead and fit these to the frame.  I wasn’t 100% happy with this – the heat shrink over the joins meant those bits were less flexible… but it all worked ok. 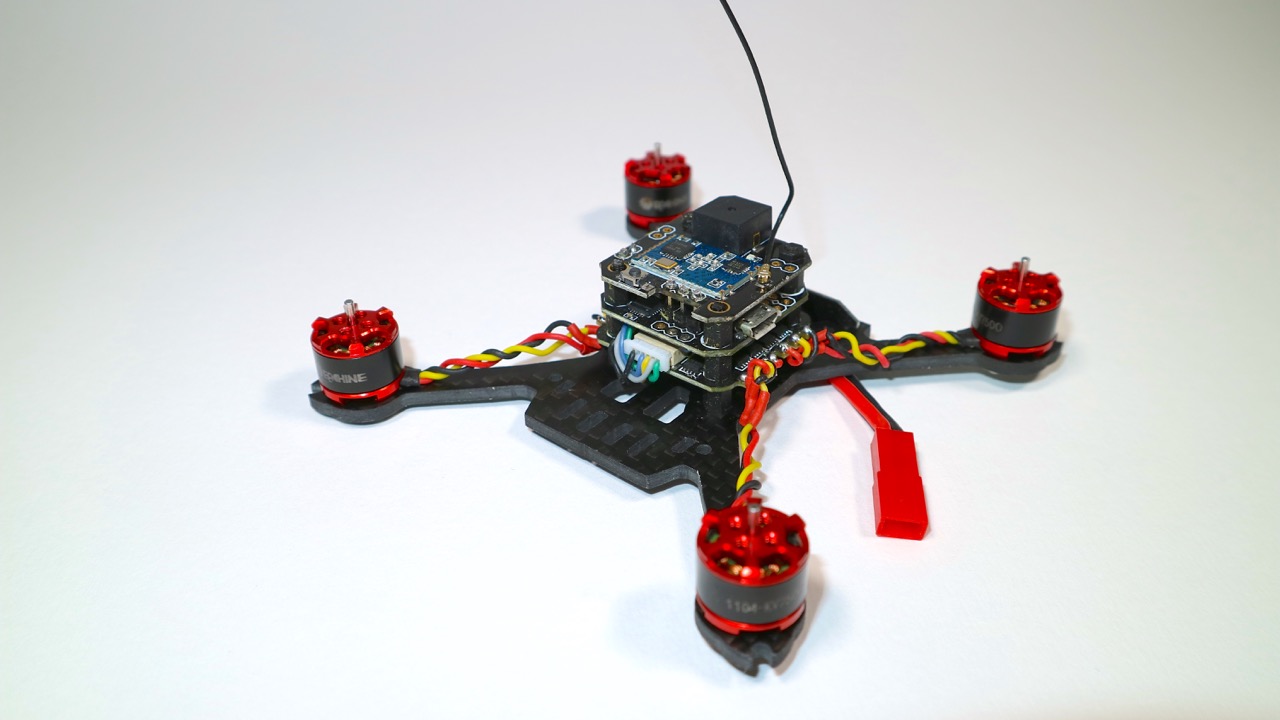 A little bit of extra work was getting the LED lights onto the rear of the frame… quite literally a case of fitting a square peg into a round hole.  I needed to trim the ends of the LED board down, and then file the holes out to make them slightly bigger before they’d fit.  Once they were in, I just added a little blob of epoxy on each end to make sure they didn’t come off again. 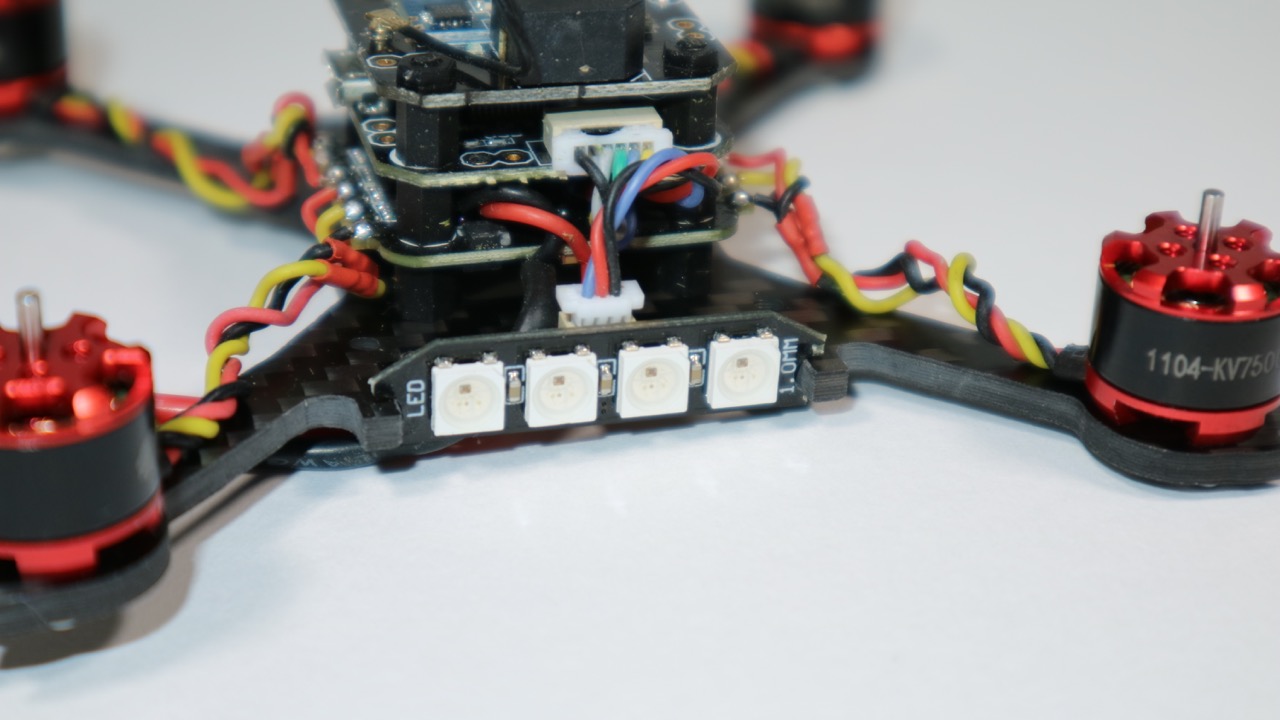 Fitting the camera into the top part of the frame was more difficult than expected.  The camera was easy enough to secure, but the skew planar antenna simply does not have enough room to fit in the space without touching some part of the top frame.  It’s interesting that this seems to have been designed to protect the skew, but really doesn’t allow it to sit comfortably in there. 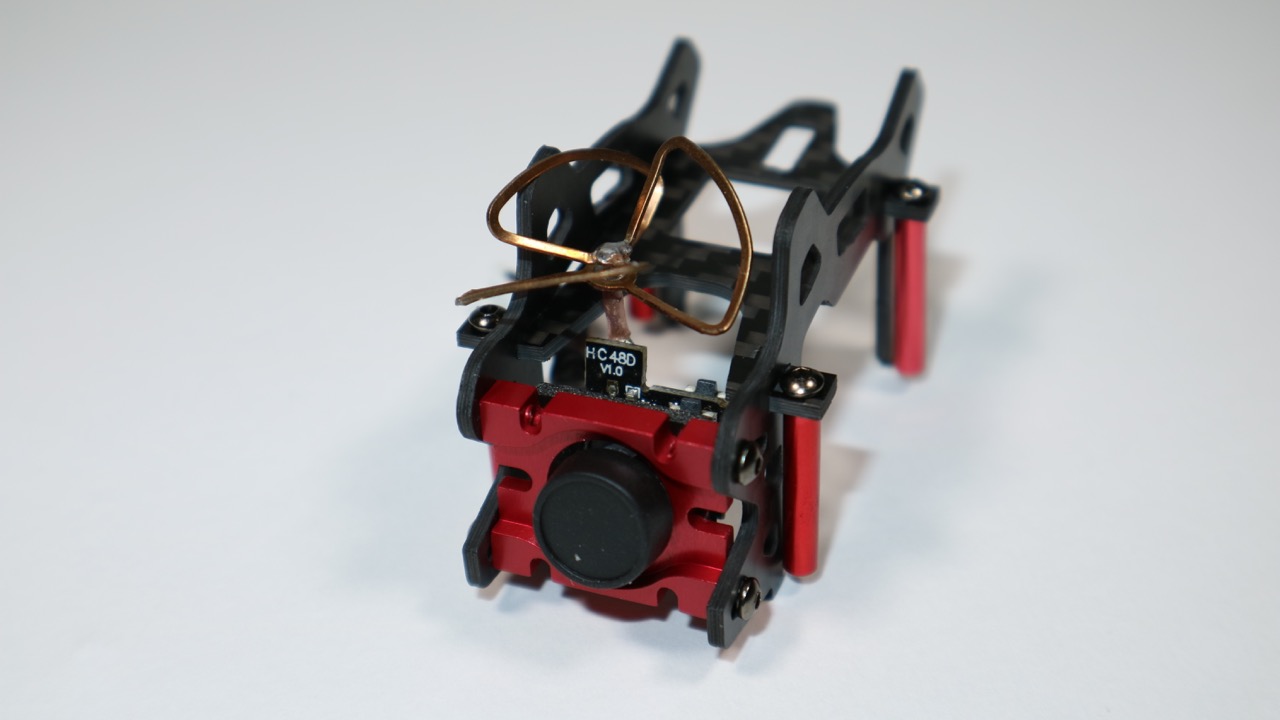 Here’s the quad finished – an Aroura 100 fitting into a Firer 110 frame.  I did the usual cable tie trick around the top plate to route the FrSky antenna with, and used a rubber band to secure the camera against it’s sticky mounting better. 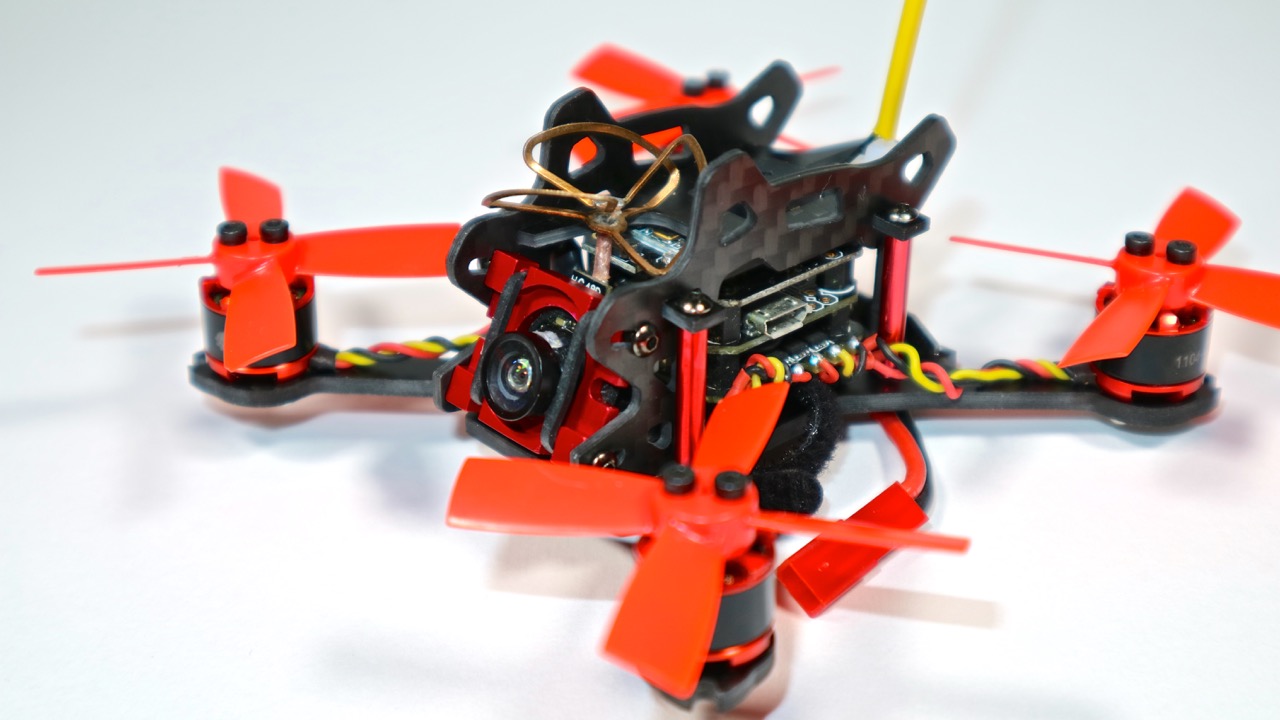 So how does it fly ?  Well, the great news (for me at least) is that the feel of the quad hasn’t changed – it’s still my lovely little Aurora, but now with props in view.  That’s what you get for moving the camera further back and the arms further out.  Here’s the YouTube video I made of the maiden flight and the subsequent follow up flight into a tree.

As I mentioned in the video, I wouldn’t actually recommend this as a straight replacement to the Aurora frame (I would just say get the 2.5mm base plate) However, if you want to try a camera upgrade, then this allows more room.  I’ll be trying to fit a RunCam Swift Mirco camera in, along with an Eachine VTX03 VTX – I’ll post about that when I do it, hopefully soon.