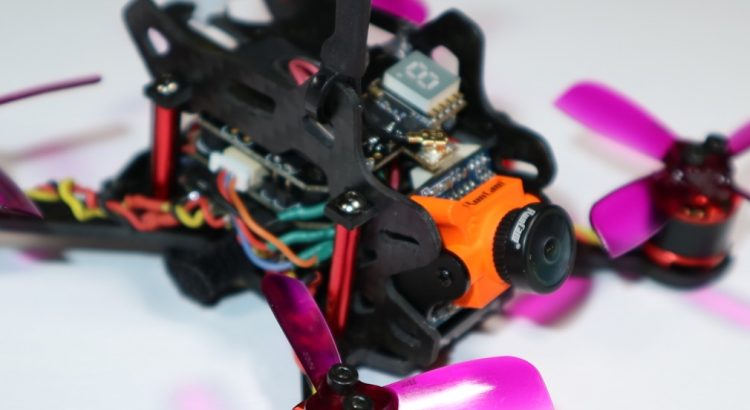 If there’s one thing the current crop of micro quads have in common (and for the purposes of discussion, I’ll class micro quads as up to 130mm motor-to-motor) it’s the quality of the camera in the all-in-one VTX/Camera combos.

That’s not to say they are awful – in fact that fact we get a tiny camera and VTX in a single package so cheaply is something staggering in itself.  But a camera that’s not as good means sometimes you can’t fly in all situations.  These cameras generally handle poor lighting badly and have a very poor dynamic range so any bright area in the frame is exposed correctly, leaving everything else underexposed.  Hand-up anyone who’s had the experience of trying to land when the bottom portion of your FPV feed is simply inky black.

I’ve used the RunCam Swift Micro in a few full-sized builds in some previous videos, in a plane, a 220 quad, and a lens comparison video.  One of my reasons for a previous post on moving the Aurora 100 to a Firer 110 frame is because I knew there was room for the Swift Micro to comfortably fit.  It’s worth pointing out that on many RTF micro quads, the Swift won’t fit in, and will need some mods, but rather than installing in the original Aurora 100 frame and working out what mods to do, I took the path of least resistance and used a slightly larger frame. 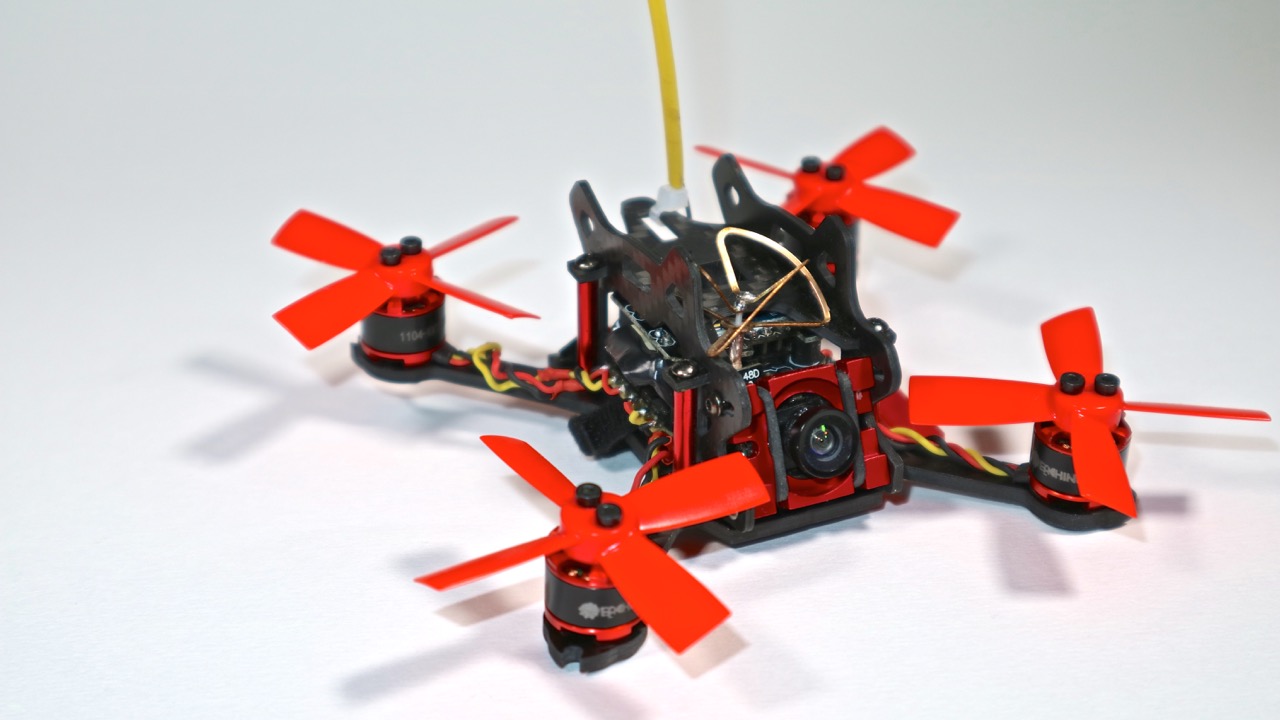 One thing the Micro Swift doesn’t have, of course, is a VTX attached to it, so we’d need to add one – and the smaller, the better.  You have a few choices here.  You can pull apart the existing AIO Cam/VTX you in order to use the VTX portion (Take a look at this video I made about doing this) or you can buy a VTX.  I bought an Eachine VTX03. 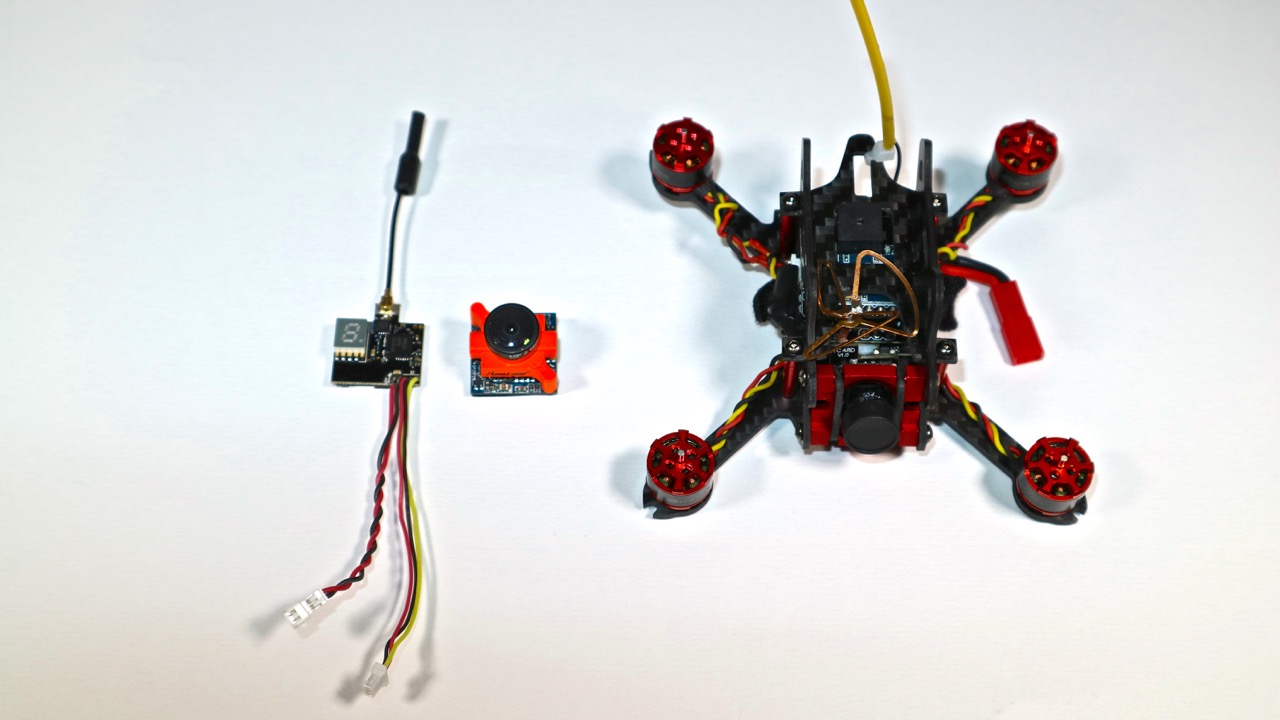 The first thing I did was to remove the existing VTX/Camera and have a look at how that connected into the flight controller.  The flight controller I’m using has an in-built OSD, and so had both a video in and video out connection.  I’ve labeled these up in the following picture, but no two AIO’s are necessarily the same – even those on the same make of quad, so double check.  To be clear, these labels are from the flight controllers point if view, so the 5v output is going to the AIO unit, not from it ! 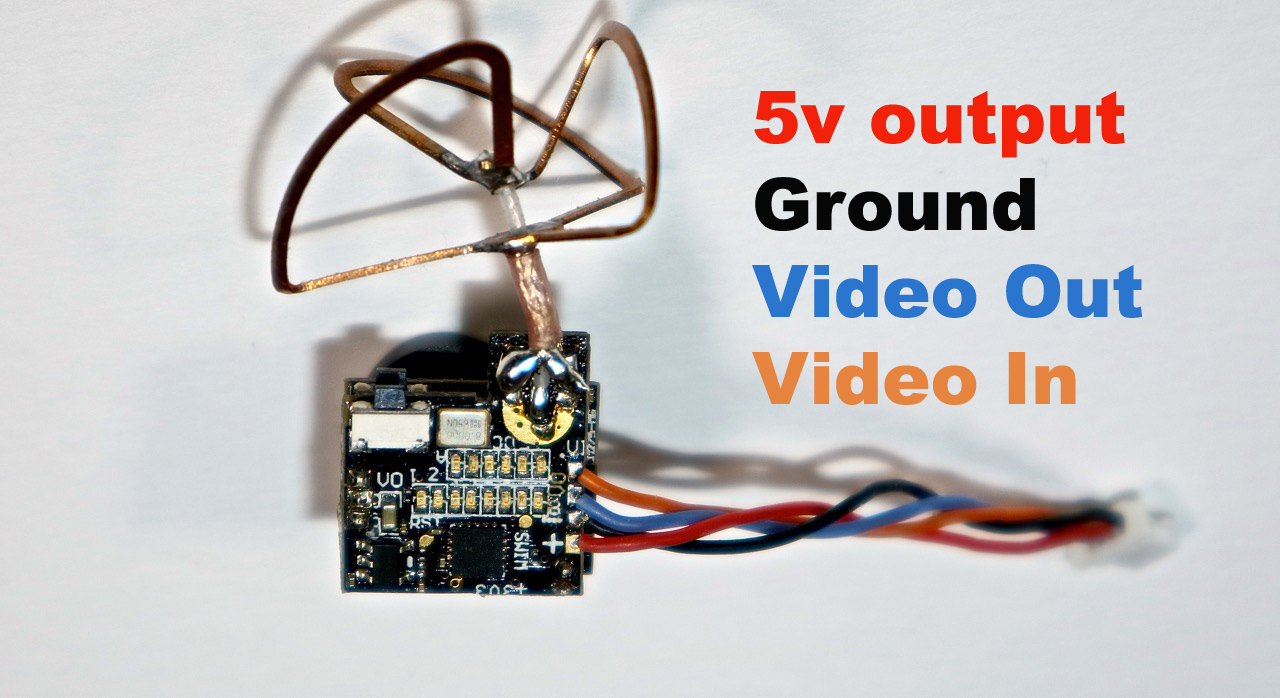 Just for the sake of completeness, here’s the same wire labeling from the VX03’s point of view.  In the case of the VTX, we only have a video in (which will need to be the picture form the camera with the OSD) so the wiring is slightly more involved, but very logical if you think about it. 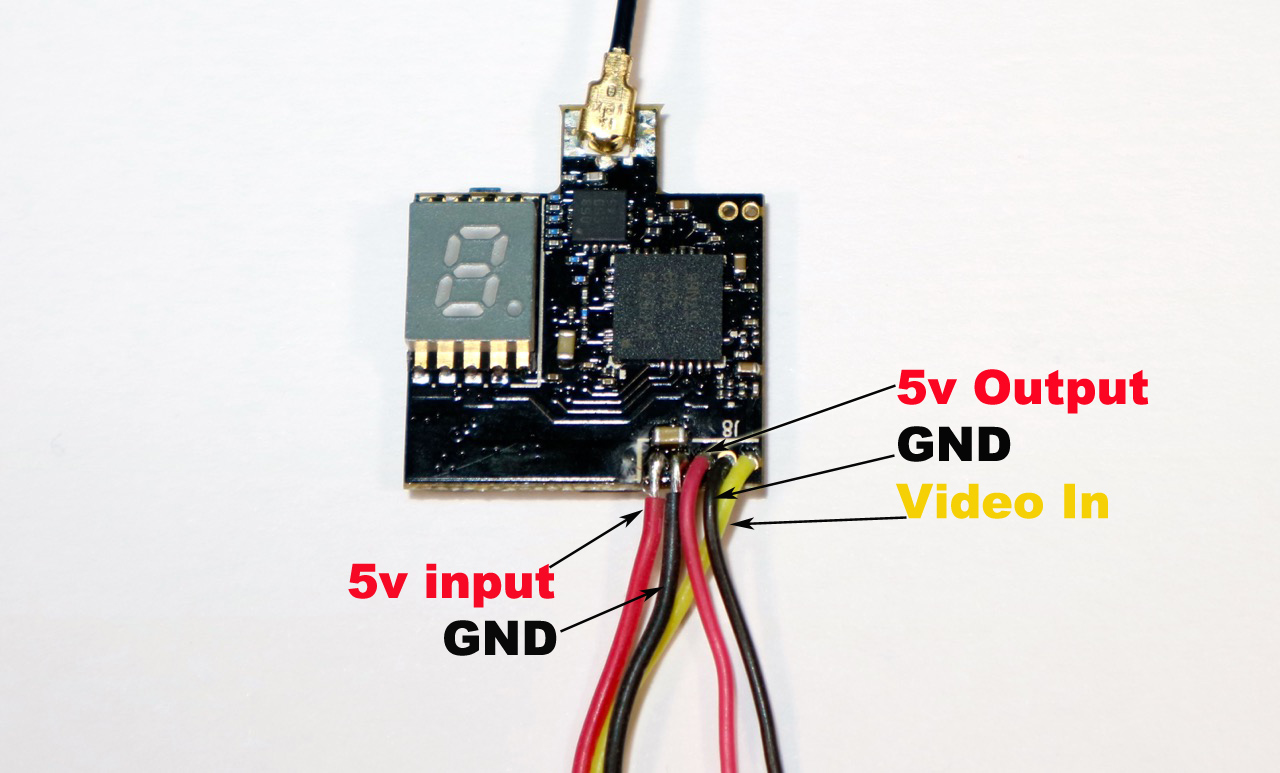 Let’s jump straight into the finished components.  We take the 5v and GND from the FC to the 5v In/GND on the VX03, and take the 5V out/GND from the VX03 to the camera.  The video out from the camera (yellow wire) goes straight into the FC’s Video in (orange wire), and then the FC’s Video out line (blue wire) to the VX03’s video in (yellow wire).  For the ease of looking at this, I’ just showing the connector for the flight controller. 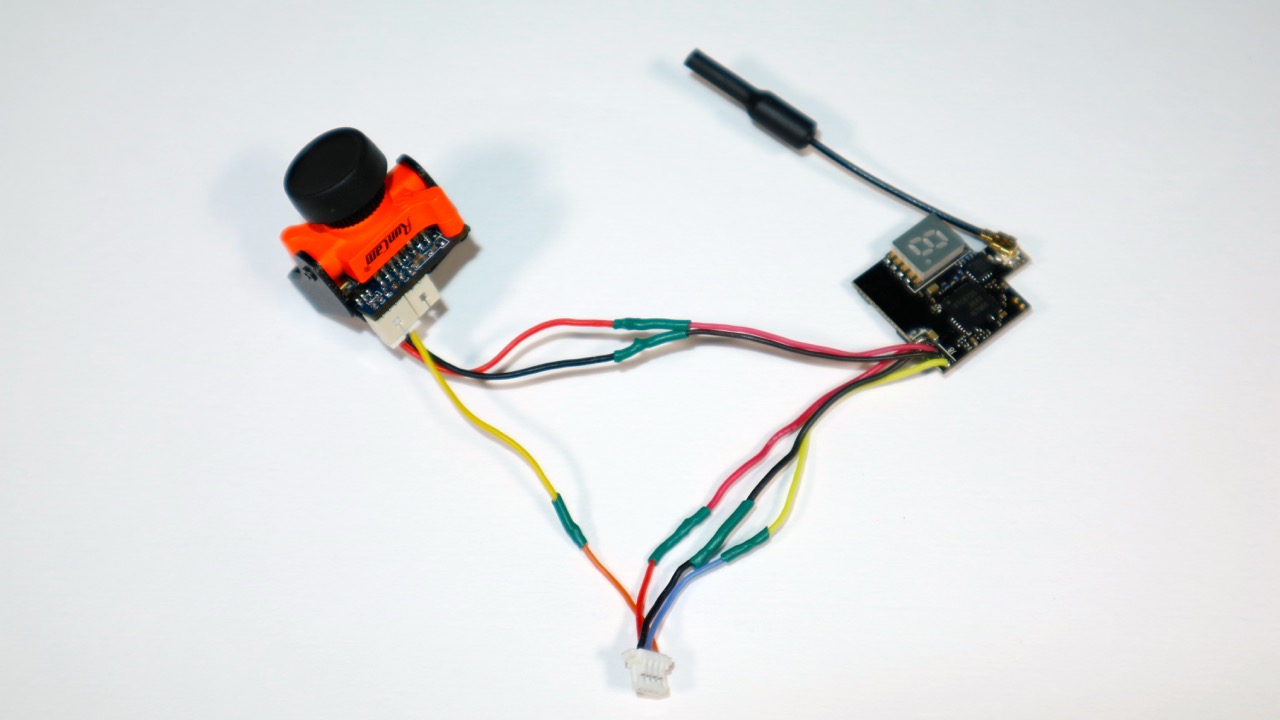 Looking at the original mounting on the AIO unit, it’s secured via screws at the top and bottom of the mount.  Whilst I could fit the Swift into one of these, it didn’t give me any range of tilt movement.

Instead, I used the mounting provided in the Swift accessories and initially attached this to the bottom plate of the quad with some hot-glue – although this turned out to not hold well enough, so I used a single m2 6mm screw and a locking nut which held things in tightly.  This gave me a reasonable range of movement of the camera and also meant the I could remove it from the mounting easily if needed. 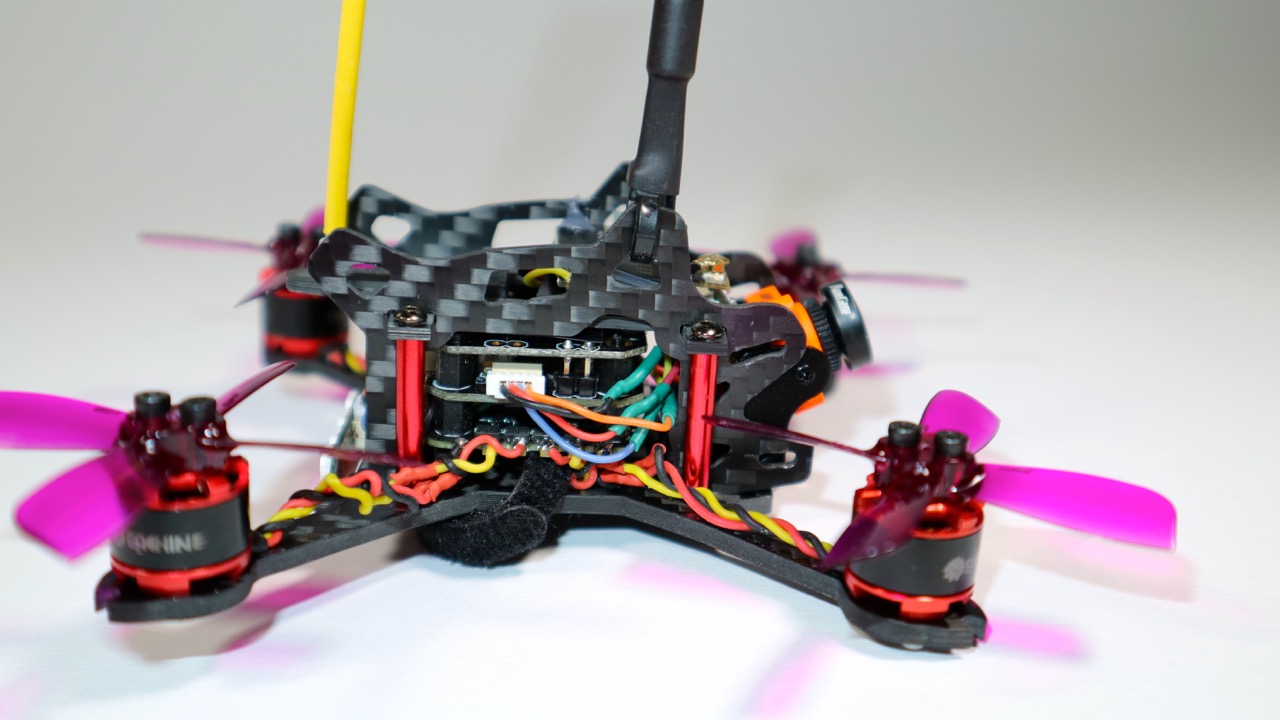 I installed the VX03 on the top plate of the quad.  From here I’m able to access the button to change the VTX’s band/channel/output power easily and can see its display.  The dipole antenna is held upright with a cable tie and a little bit of heat shrink.  I also took the opportunity to install some Gemfan 2035 props which really improved the performance on the Lizard 95 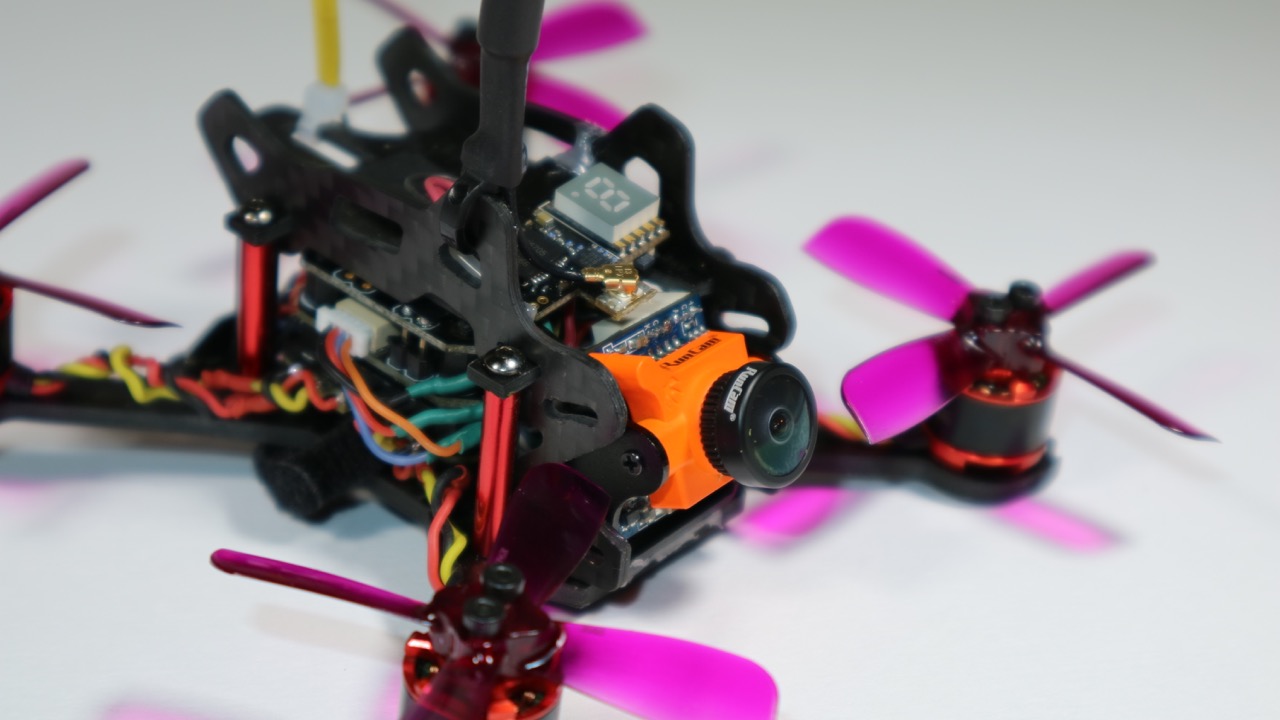 When I powered on for the first time, I noticed the text in my OSD was about 1/4 of the way up from the bottom of the display (where it had been previously) this is because I have a PAL Swift Micro, and the previous AIO VTX/Camera was NTSC.  PAL has more vertical resolution, so I moved my text down to accommodate this in Betaflight.

Next, I went out to test it.  As you’ll see in the accompanying video I had one or two issues along the way, but after flying and comparing side-by-side to an AIO VTX/Camera combo, the RunCam Micro Swift is a considerable upgrade.

Update 28/09/2017: Using the wiring layout as described above (i.e taking the 5v from the flight controller to the VTX, and then letting the VTX power the camera) was having the occasional weird issue where the camera’s colour would go weird (you can see it in the YouTube clip above) This would resolve after a reboot, but I had an inkling it was possibly because of the amount of amps being drawn through the flight controller was too much on power up.

I recently tested the RunCam Micro Sparrow which was slightly hungrier on the milliamp draw and this caused the flight controller to reboot multiple times and basically go crazy.  Because of this I tried running the camera direct from the battery (so the red power line form the camera was disconnected from the VTX and soldered to the same solder joint that the JST lead is connected to).  As far as the Micro Sparrow went, this caused a lot of noise and wasn’t a good solution.  The Micro Swift, on the other hand, handled this slight dirty power supply well and there was no extra noise.  I mention this if you are having any issues in the original configuration, then you can change the way you power your camera and fix the issue that way.  Here’s an additional video looking at the Sparrow.