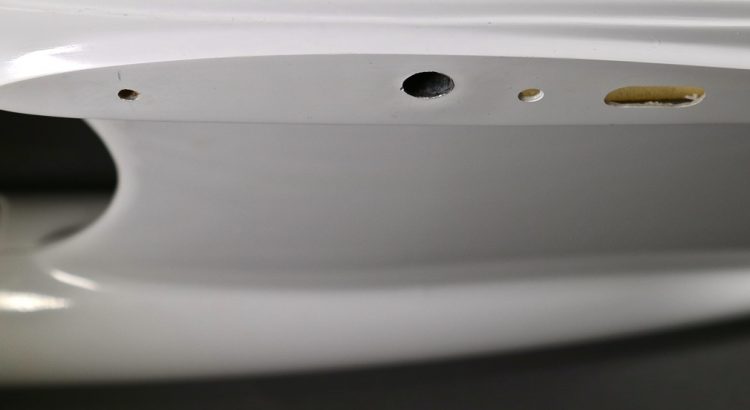 I’d touched on the Skyhook Discovery back in a previous post, and if you’d watched the accompanying video, then you’ll know that I was nervous about building it.  Basically, I didn’t want to screw the build up, and destory what is a lovely looking model.  I guess the build intimidates me a little because it’s all “proper” stuff: composite fuse, wrapped balsa wings… nothing I’ve touched before.

So what to do ?  Well, the way I approach this sort of thing is the same way I approach anything which looks complicated, or just that there’s simply a lot to it.  That is to simply break it down into smaller and more manageable steps – and of course post about each of this little steps as I do them.  Obvious really isn’t it.  So I figured in my first day of building I’d mount the motor to try and take away my fear of putting holes into the fuse.

Rob Thomson, who was one of the designers of the Skyhook and kindly provided me with a model to build also included a Turnigy Gliderdrive SK3 960KV motor – which is an absolute beast of a thing to hold.  But looking at the back of the fuse of the Skyhook, it doesn’t come with any sort of mount. 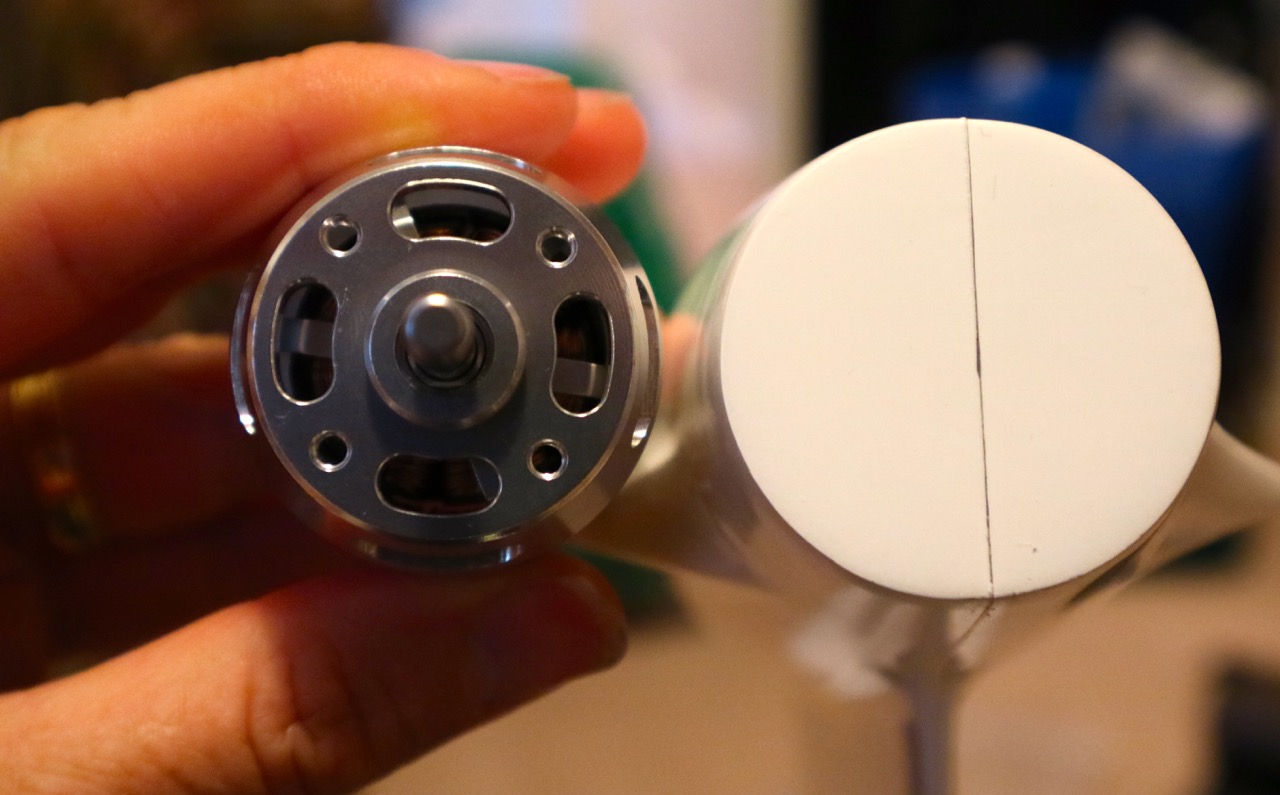 So that would mean drilling through the fuse in order to mount the motor on the inside.  So the first thing I wanted to figure out is how I would drill holes in the right places.  The motor also has a raised section surrounding the shaft which would need a larger hole cut for.  So I set about collecting some measurements. 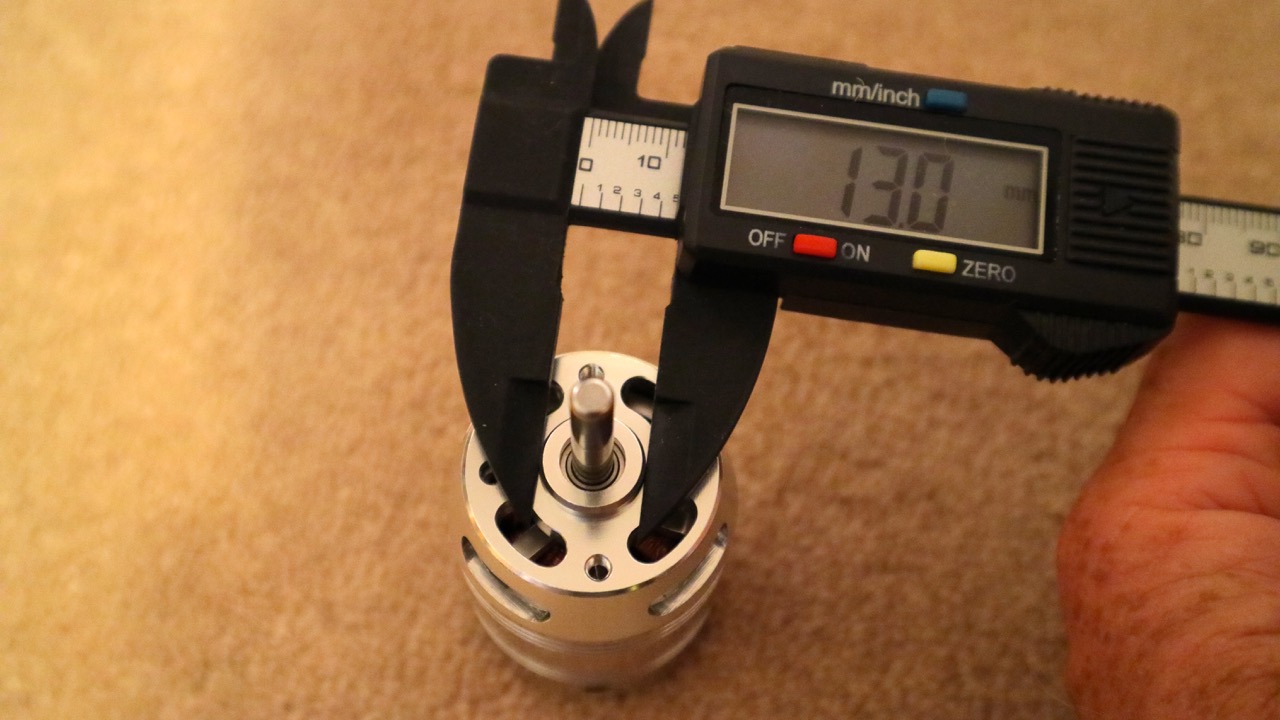 As soon as I had the data – and there was some room for error here in trying to accurately measure centre of the screw hole to the middle of the shaft – I fired up Fusion 360 and sketched a template out.  Fusion 360 is a really powerful (free) package in which I can just about do simple things with.  I am seeing the power of parametric modeling, but I need to work at it a lot more. 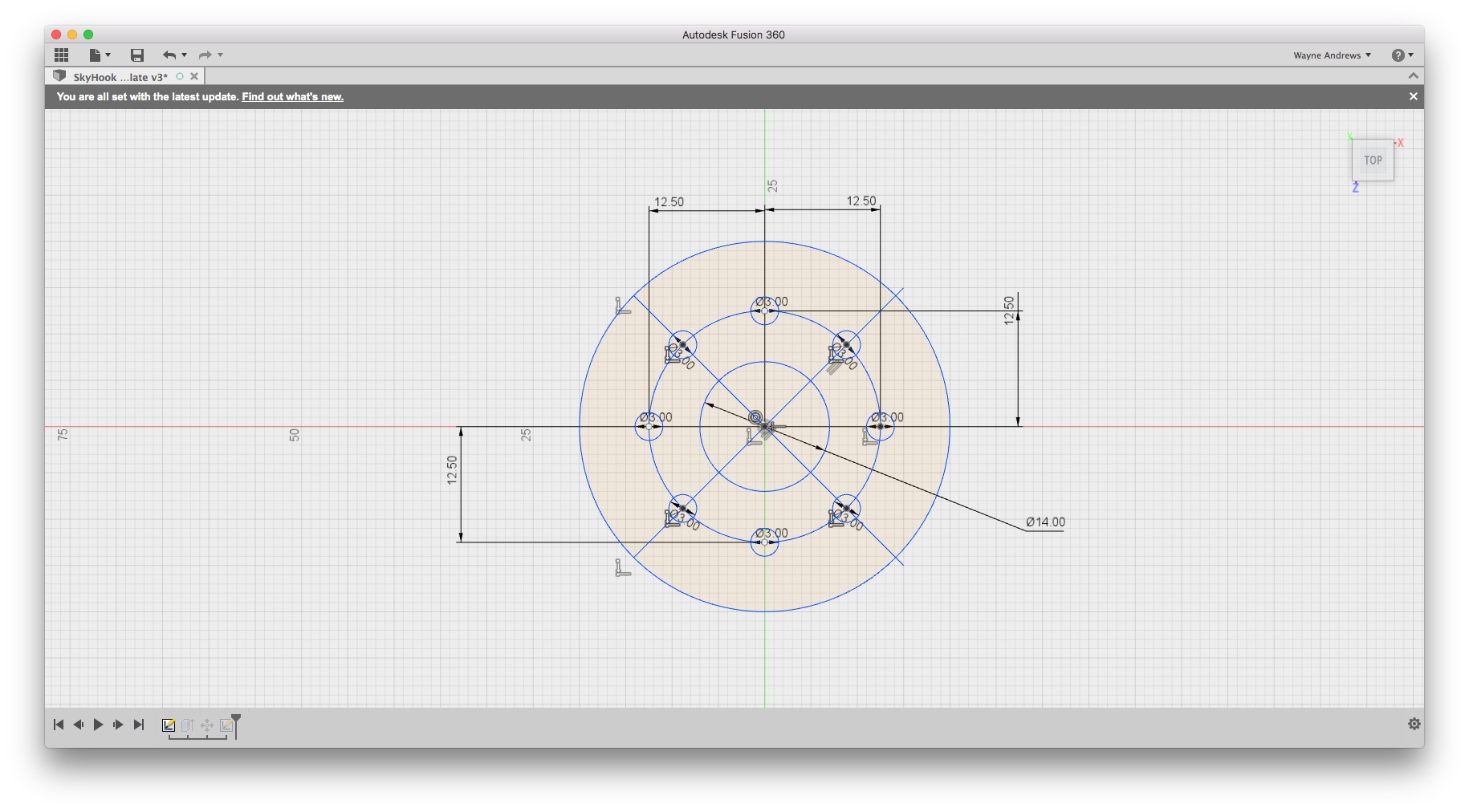 With the template designed, I went ahead and printed it on my 3d printer.  I actually did several versions, as I found my initial measurements wrong.  I’d measured the screw holes as being 12mm out from the centre, but found them to be actually 12.5mm from the centre.  Thanks to the way Fusion 360 worked, this simply took a dimension change to the 2d sketch to update the 3d model. 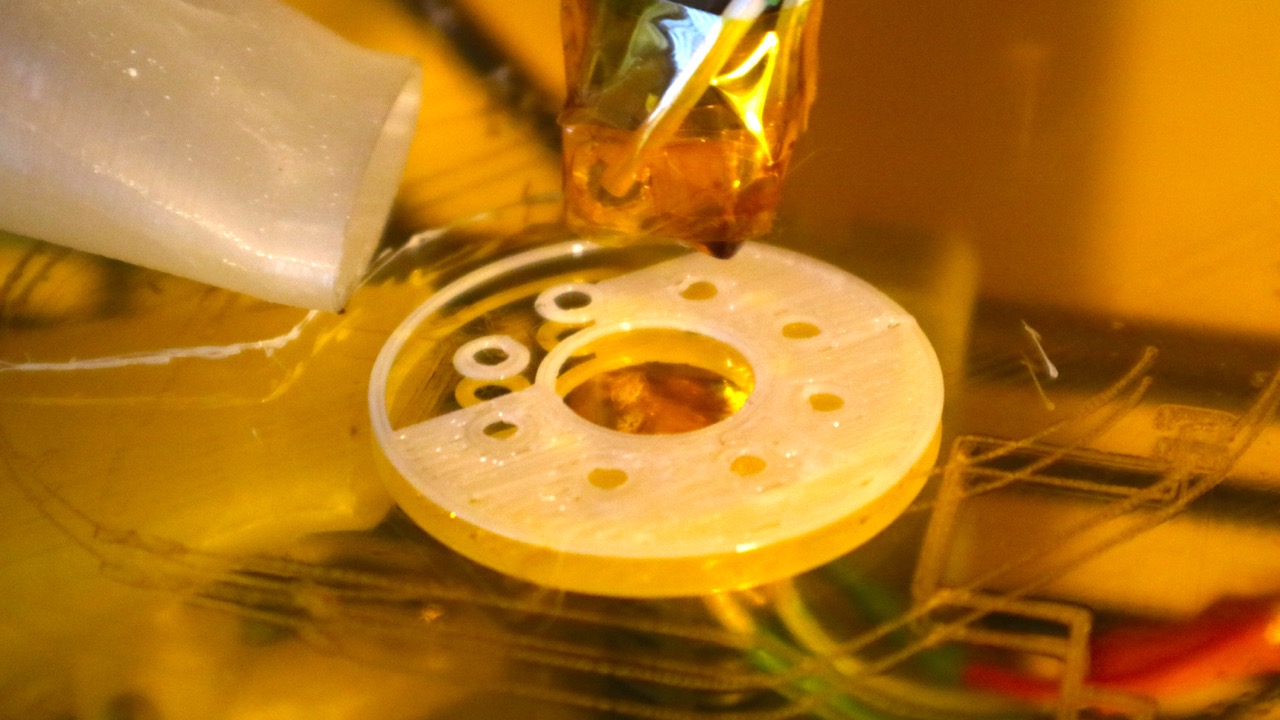 I then checked the alignment of the screw holes to the motor.  If you are wondering why I have more screw holes than I needed, it’s because after I spoke to Rob, he told me not to forget to make some cooling holes for the motor, so these additional holes line up over the openings in the end of the motor which should let heat escape.  If you are also wondering why the template is much bigger than the motor, it’s because it’s designed to fit on the end of the fuse. 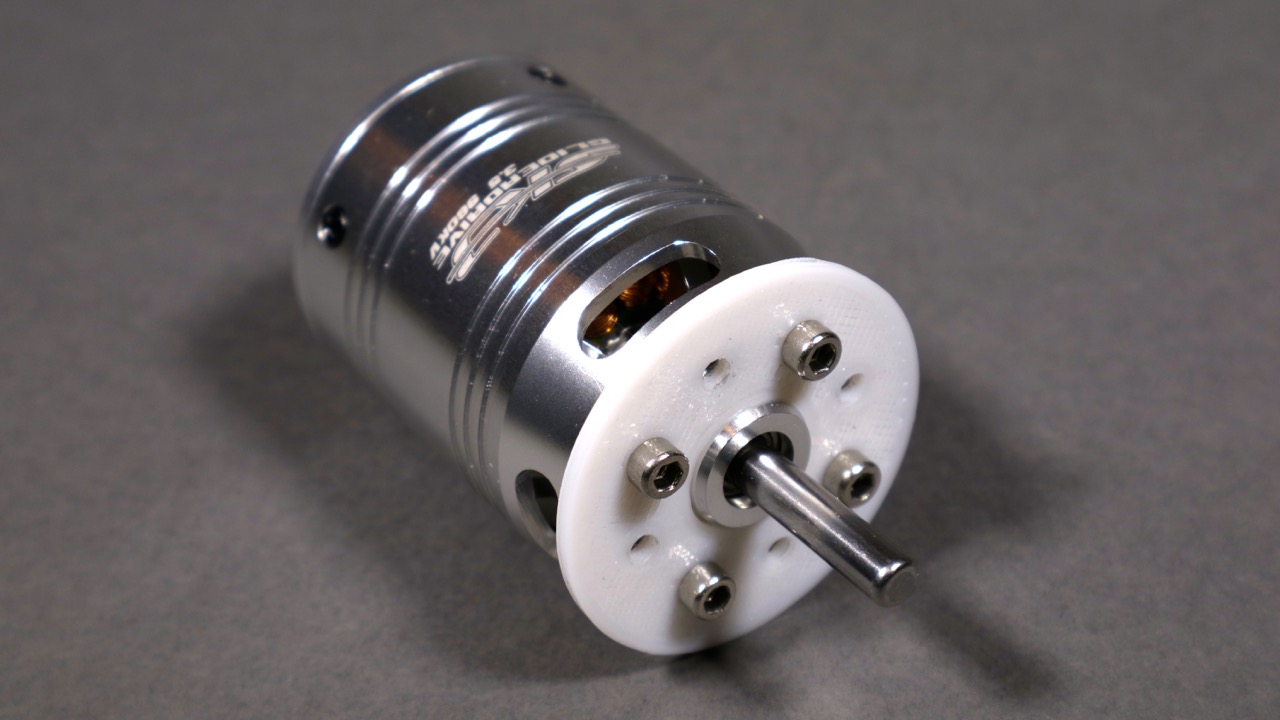 The reason for fitting it to the end of the fuse is so I have a template for drilling.  As long as I can put a drill bit through the holes in the template and drill through the fuse, then I should be able to mount the motor perfectly…. at least that’s the theory.  So I went ahead and taped the template onto the fuse and instantly wished I’d printed it in a different colour. 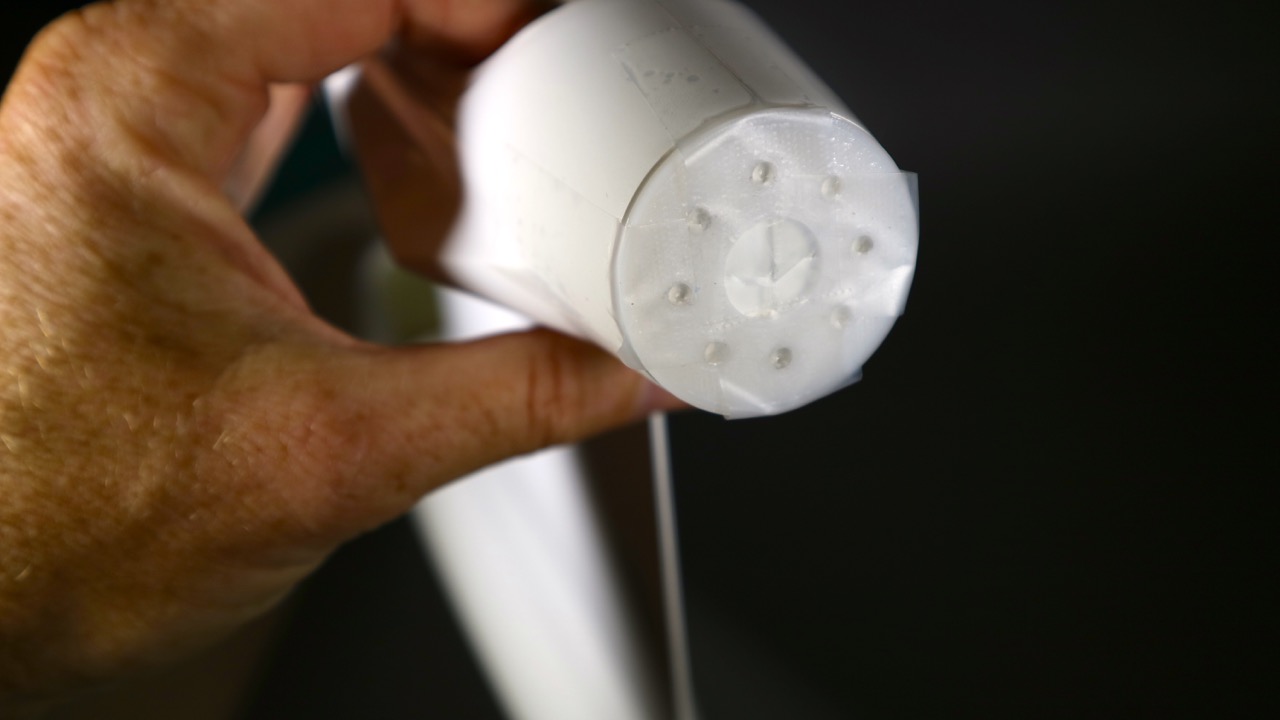 The screw/cooling holes are 3mm in diameter and the large centre hole is 13mm.  But first, I used a 1.5mm drill bit to drill out some “pilot” holes. 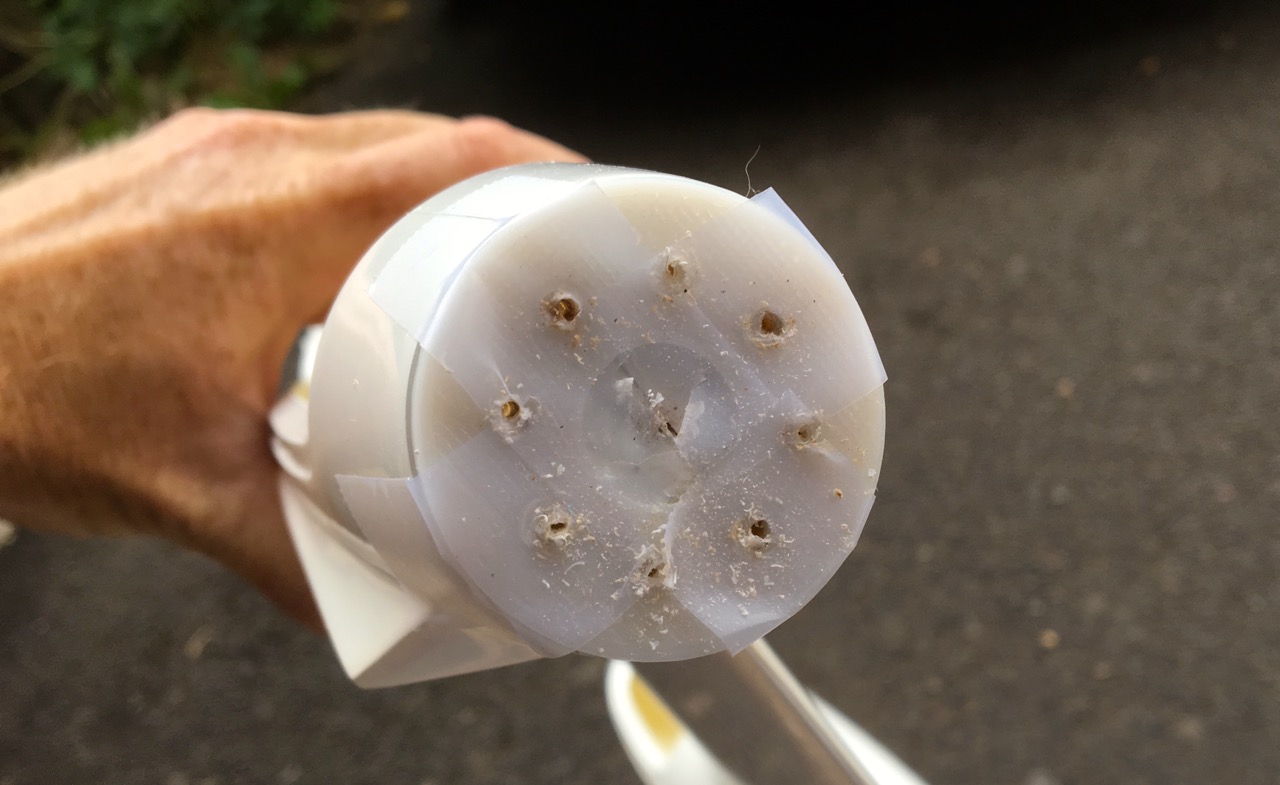 After widening these holes out using a 2.5mm and then 3mm drill bits, I tackled the centre hole.  The largest suitable drill bit I had was only 8mm, so after that I attempted to widen further with a hand file, but the rate of progress I was making meant I’d need several years to finish.  Instead, I found a little sander style bit for my rotary (cheap version of a dremel) tool and was able to make a reasonable circular shape of the right size in just a few minutes.  After cleaning things up, it looked pretty neat. 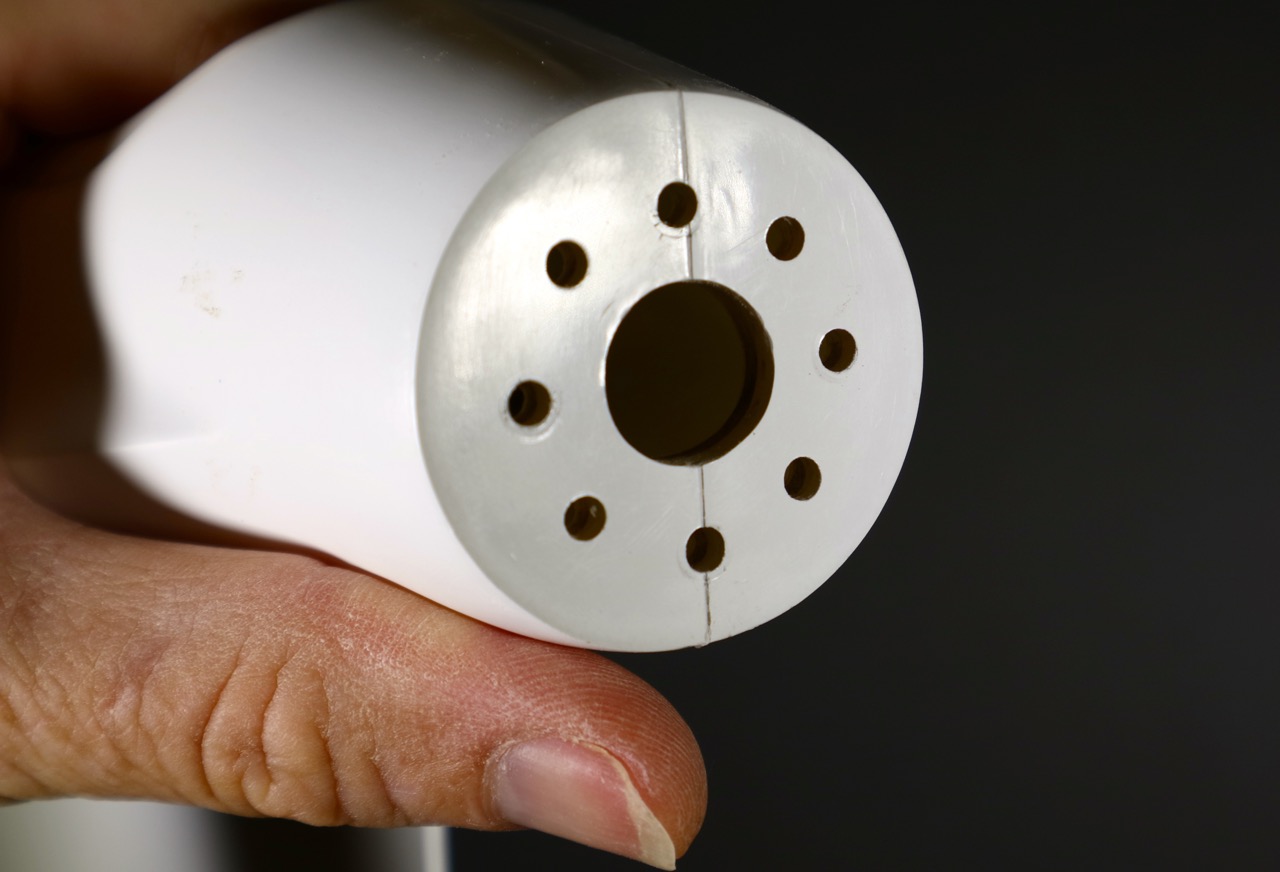 The motor pushes into the back of the fuse from the inside, just leaving the three bullet connectors exposed.  Although the motor is an outrunner, it’s referred to as an “outrunner in a can” so it has a surrounding outer shell that doesn’t spin. 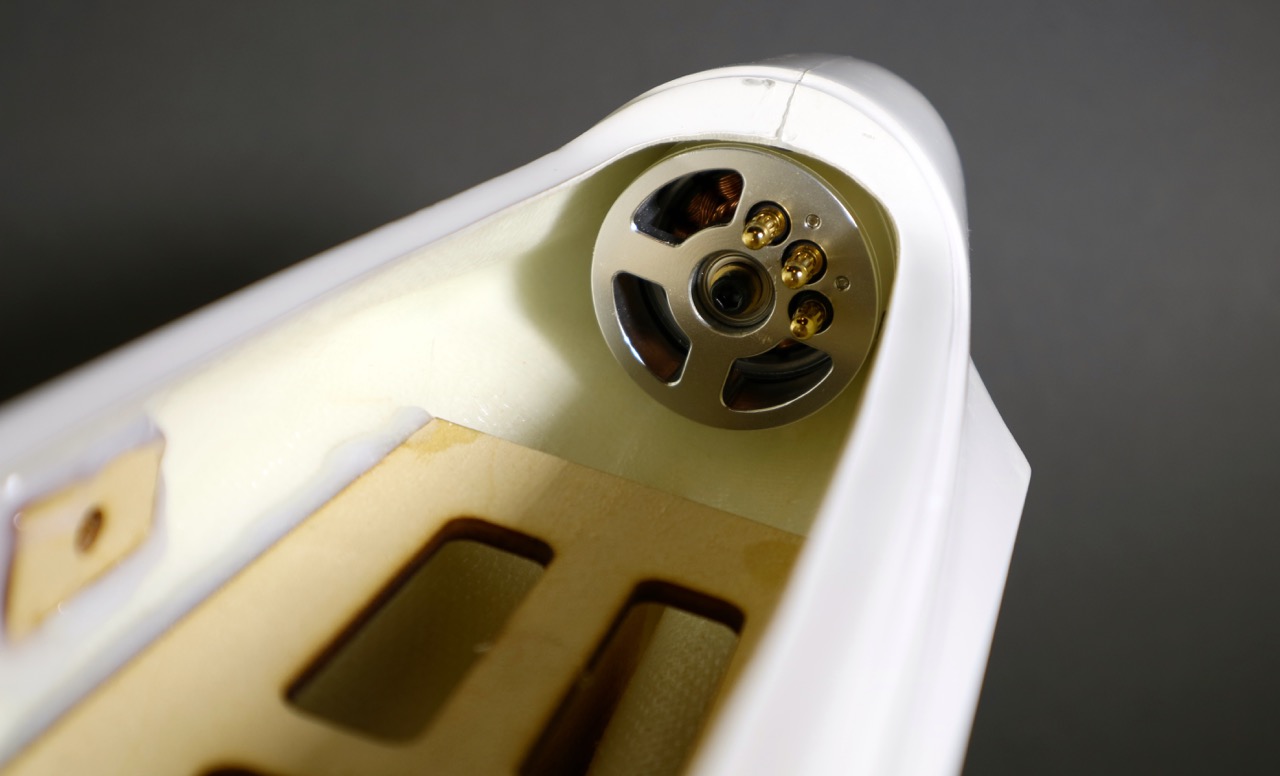 From the back of the fuse, just the shaft (and that little surround) is exposed.  Motor mounting has been successfully completed, and confidence levels have been raised as despite me holding a drill against it, nothing exploded, broke, or went up in flames 🙂 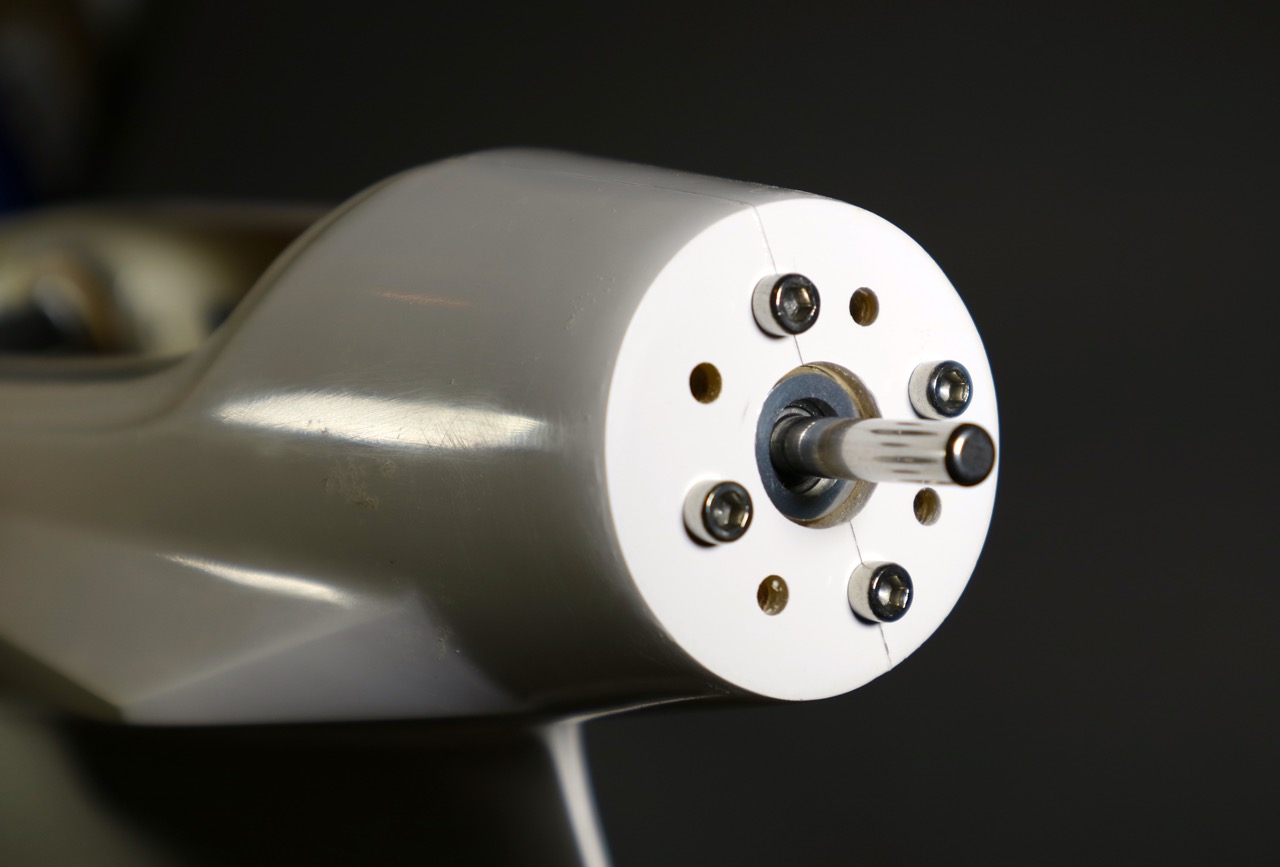 I’ll be back in part two for another bite sized build chunk.