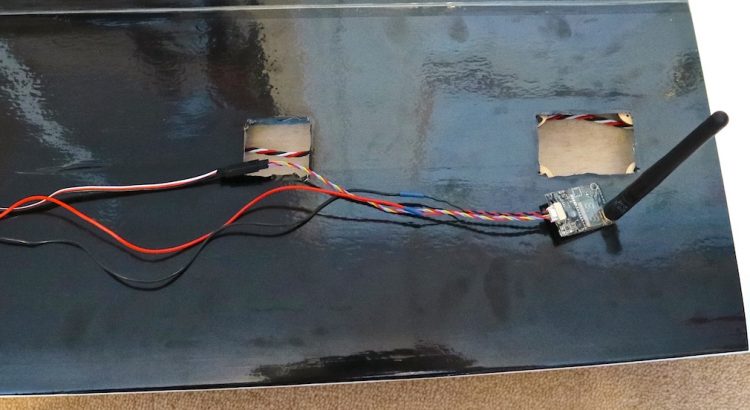 After installing (most) of the servos in the last part of this build, I seemed to be caught up in a circular dependency situation where everything I wanted to start installing seemed to depend upon another already being present.  I had the flap servos, receiver and VTX to install but how could I do this without the flight controller being in place, and how could I do anything with the flight controller without the power system there… you get the idea.

So I decided to start with power and the figure it out from there.  As far as power went, I would obviously have voltage coming in from a lipo (I settled on using 3s in the end) into the ESC, and I’d be using the 5v BEC to power the receiver, flap, and pan servos but an additional standalone BEC running at 6v to power the aileron and tail servos.  The higher voltage letting me get more torque out of the servos. 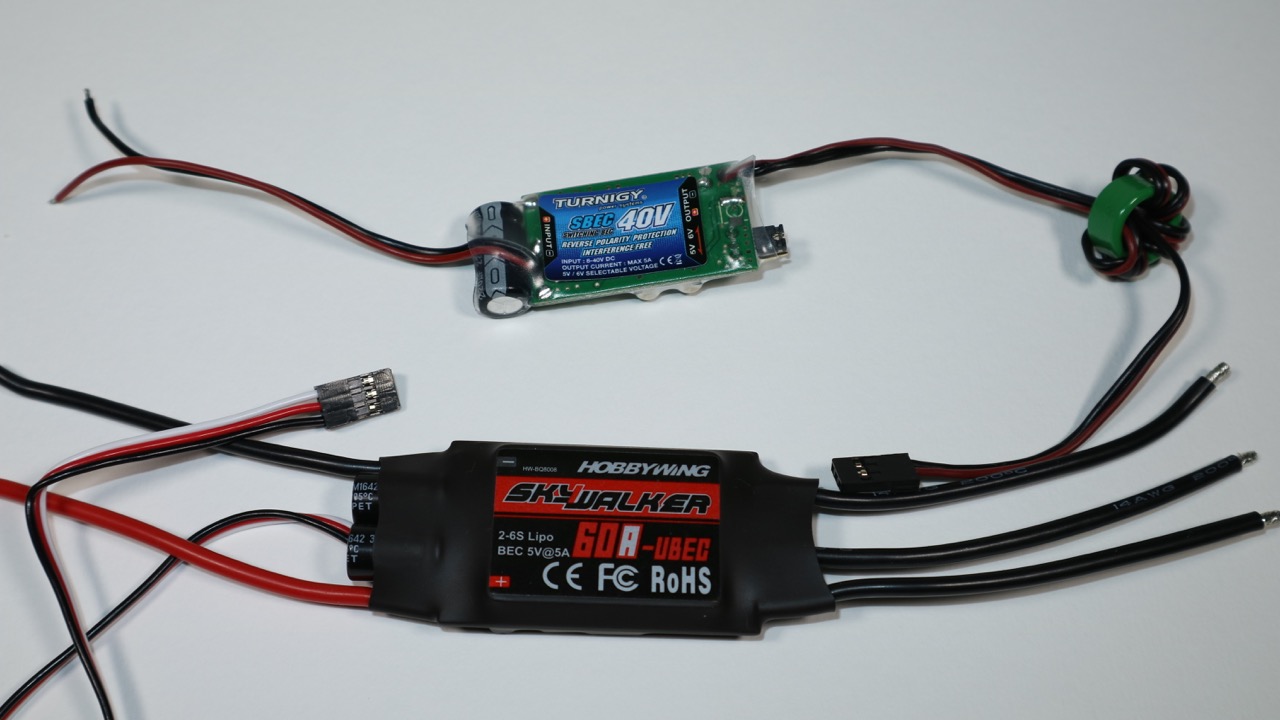 I added an XT60 connector to the ESC, also added another two sets of positive/ground connections in.  The first was the BEC, and the second would power the flight controller and let us read the battery voltage. 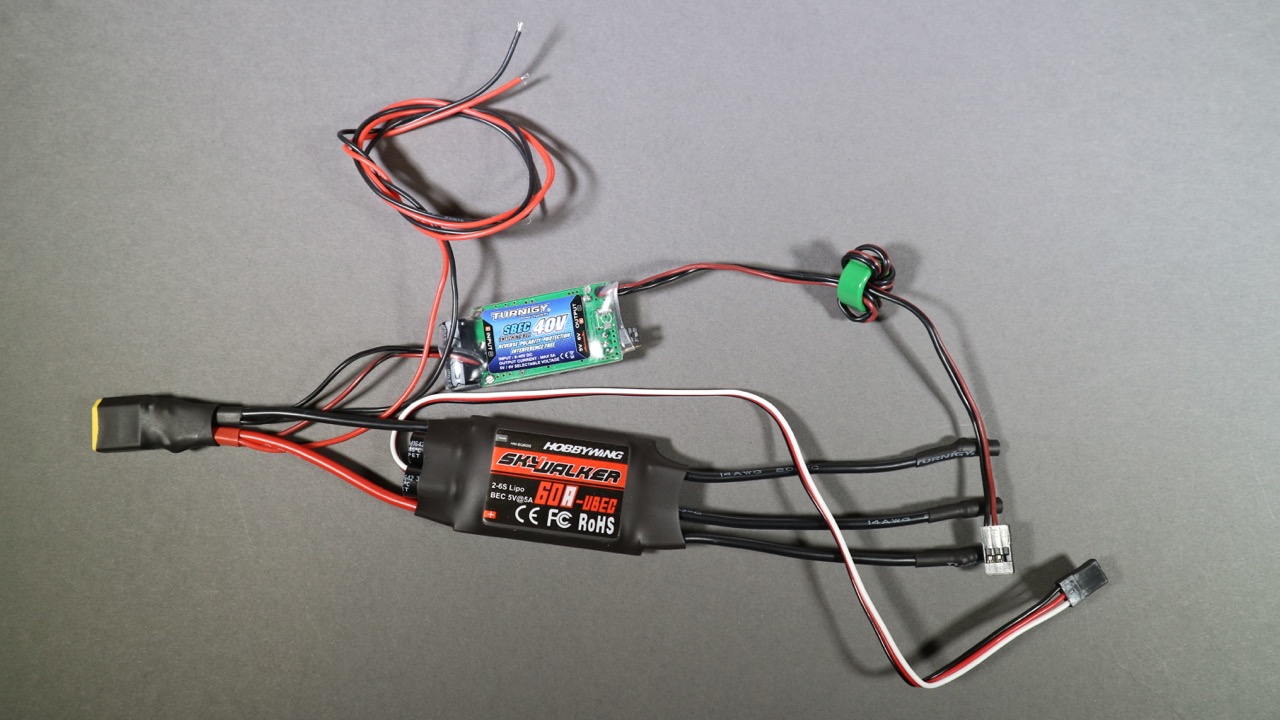 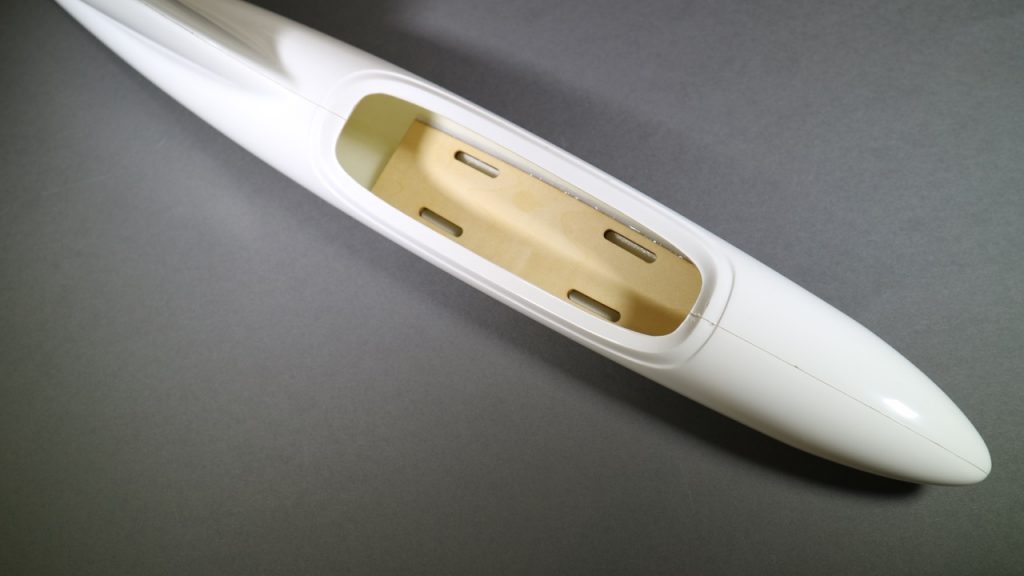 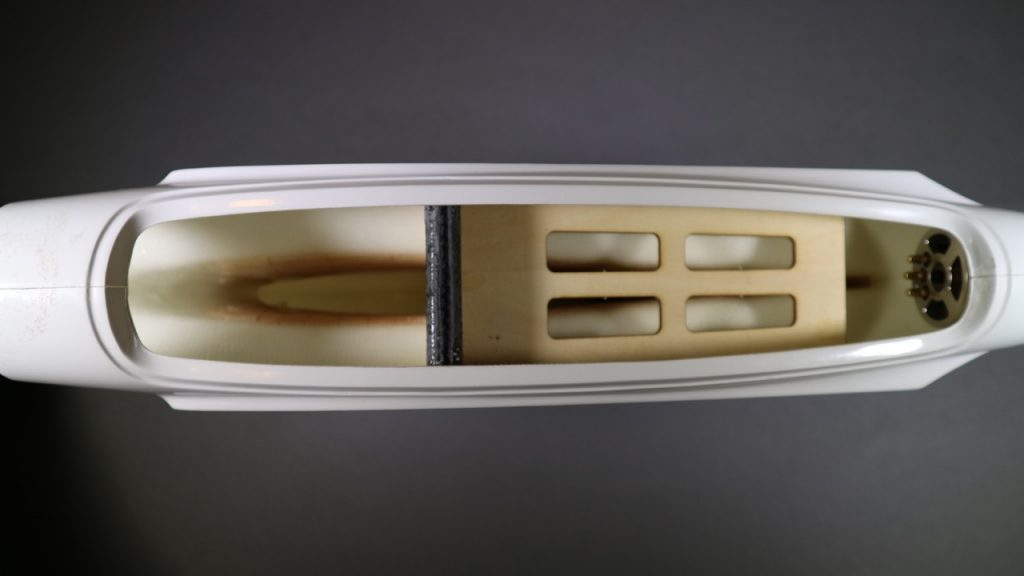 I considered how to mount the flight controller into the top equipment bay.  I first thought if sticking it down somehow, but decided it would be useful to be able to remove it if needed.  Essentially I wanted a similar stand-off system to a mini-quad, but didn’t have the holes available.  So I went and designed a little platform that I could mount the board on with stand offs.  I could stick the platform down securely, but easily remove the flight controller if needed.  I printed it out to test the fitting. 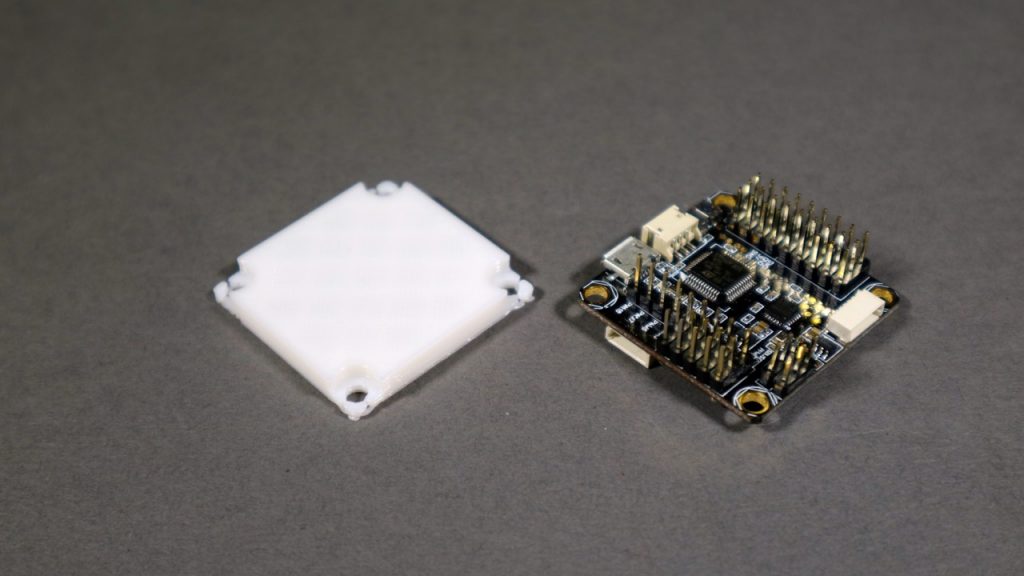 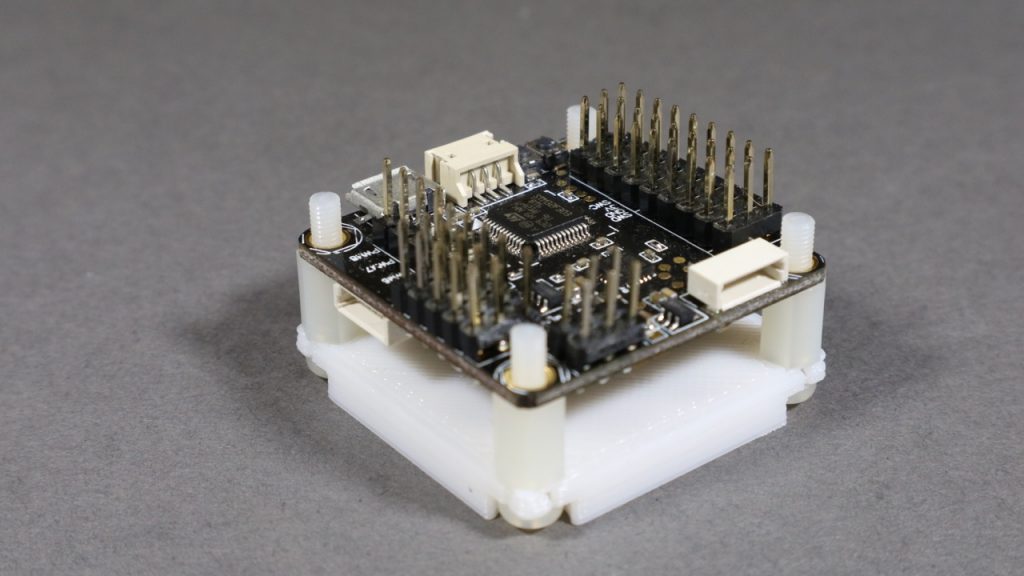 Having installed the platform in the bay, I realised that although I’d tested the flight modes using a model, I hadn’t actually tested the flight controller with a camera, VTX, and more importantly a GPS.  Having made the decision to run on 3S, I used a jumper on the Omnibus’s J11 pins which would power the camera and VTX connections (The RAM pins) using the VBAT voltage (which comes in via the red JST connector I added to the long cables I split from the XT60 connector. 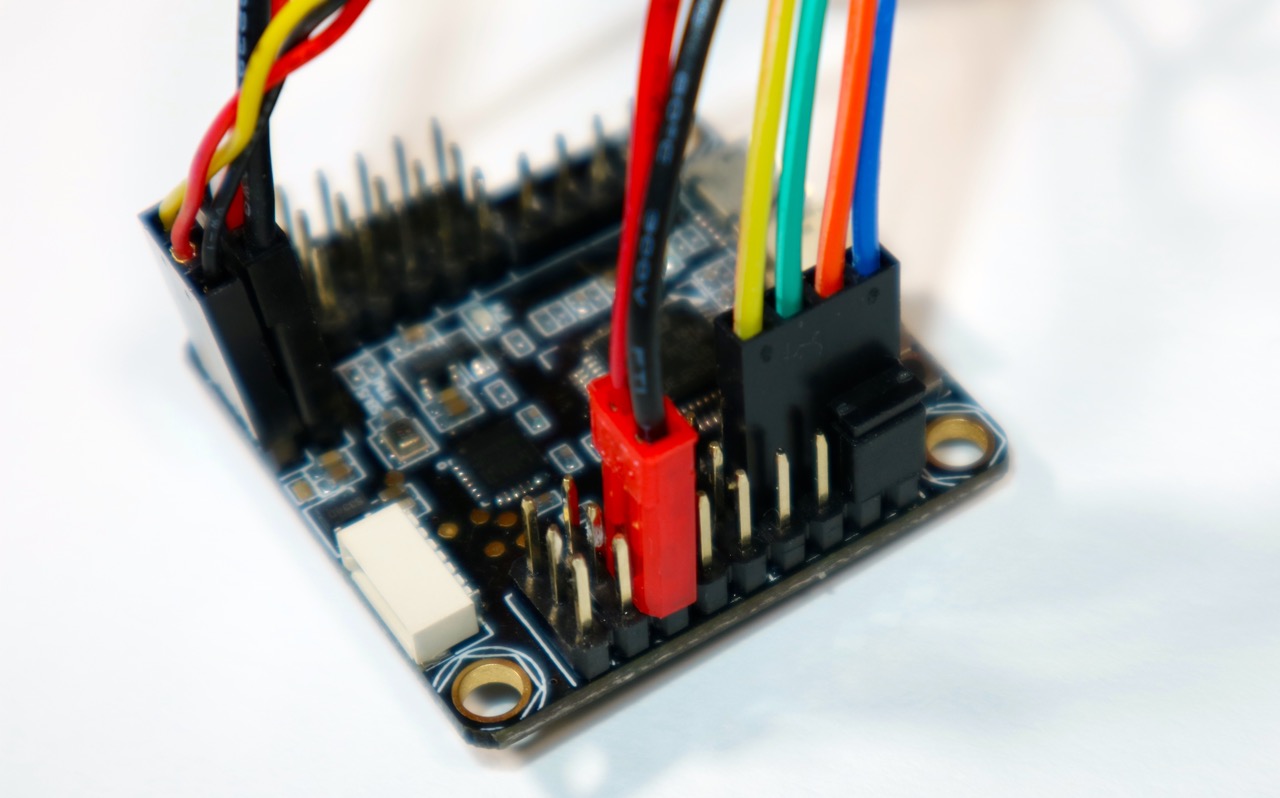 Having put everything together though, I wasn’t getting anything from the GPS, so I used a little Arduino sketch just to read the output from the GPS to make sure I was getting something.  Even if there are no satellites, the GPS will still blurt out NMEA data in plain ASCII, so it’s very simple to check.  I was getting nothing.  As it turns out, the wiring to the GPS seems to defy any logical sense of coloured wire.  I’d assumed the red wire was 5v, black is GND and the other two were TX/RX, not in this case, welcome to backwards world.

With the GPS finally talking I hooked everything up and checked I could get a fix – looking slightly suspicious wondering up my street holding a lipo, with a bundle of wires, looking into my Gteng FPV watch to check my fix.  In the end I went with the CA20 Camera and the K33 600mw VTX, both from AKK Tech. 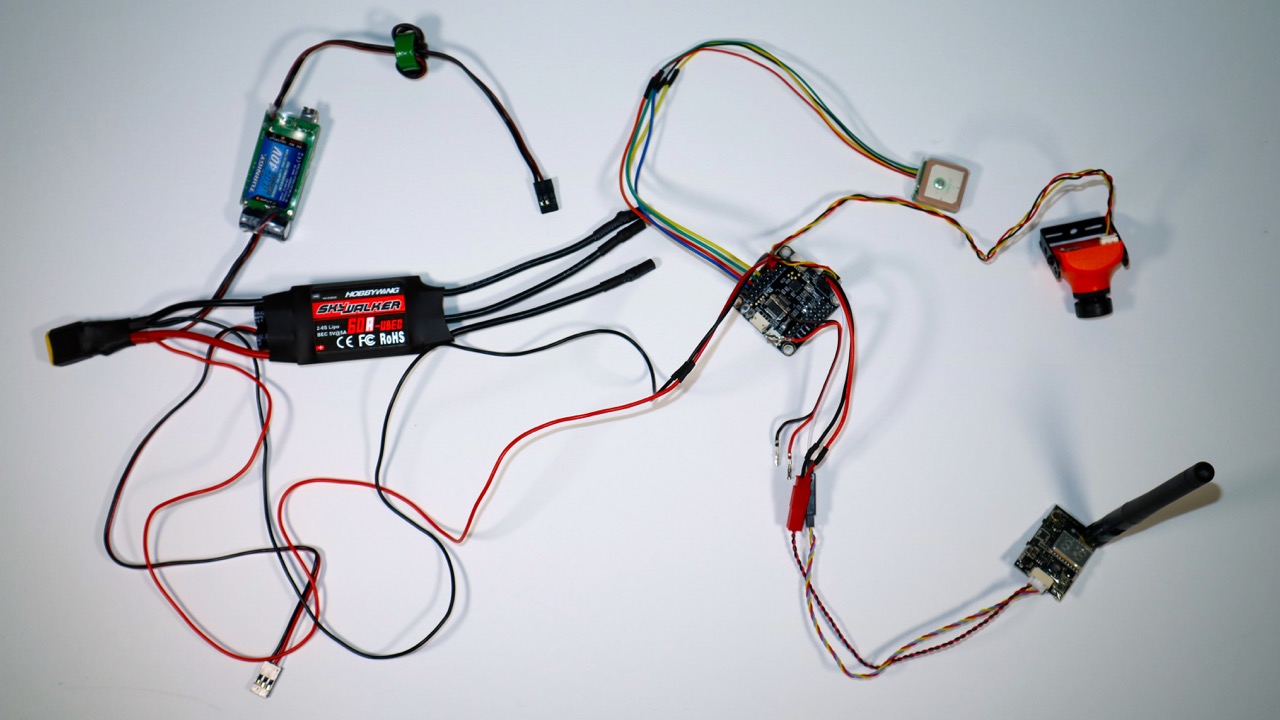 With the basic wiring working, I picked out a place to install the FC mount into the canopy and then epoxied this into place. I chose a position where it wasn’t obviously in the way of anything else, and where I could have enough room to route cables around the plane easily.

Next up, I needed to construct a bit of an odd cable for running the aileron and v-tail servos.  Odd because I would be running the power to the servos from the 6v BEC, but taking just the signal cables into the PWM pins on the flight controller.  To make matter more complex again, I’d need to be able to disconnect everything for when the plane comes apart to pack up in a car or something similar.  I ended up with this cable, where the BEC comes into the servo extension with just the ground/power wires which are then linked to 4 other servo extensions, but the signal cable from the extensions are made into a 4-pin servo-style lead that plugs into the flight controller 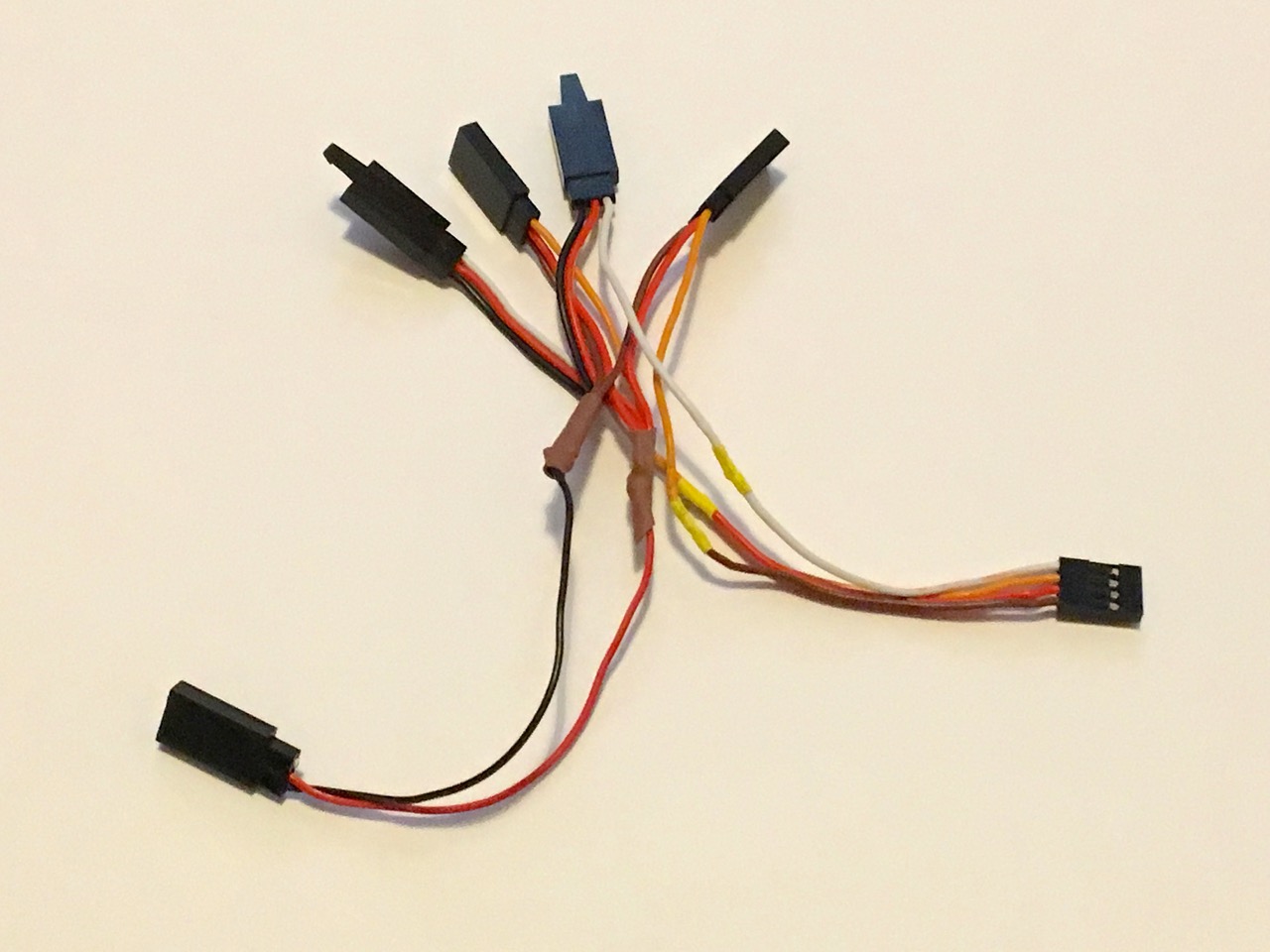 With the idea of how power and signals were going to be moved around the glider, I cracked on with getting servo cables routed around.  Getting the motor wires in, and bringing the ESC and BEC cables through form the battery bay to the main canopy was easy.   It was the tapering of the main canopy which made it difficult to route the servo cables through to connect to the V-Tail servos.  We got there in the end though, I used some tipex and a marker to label up which servo lead joins where. 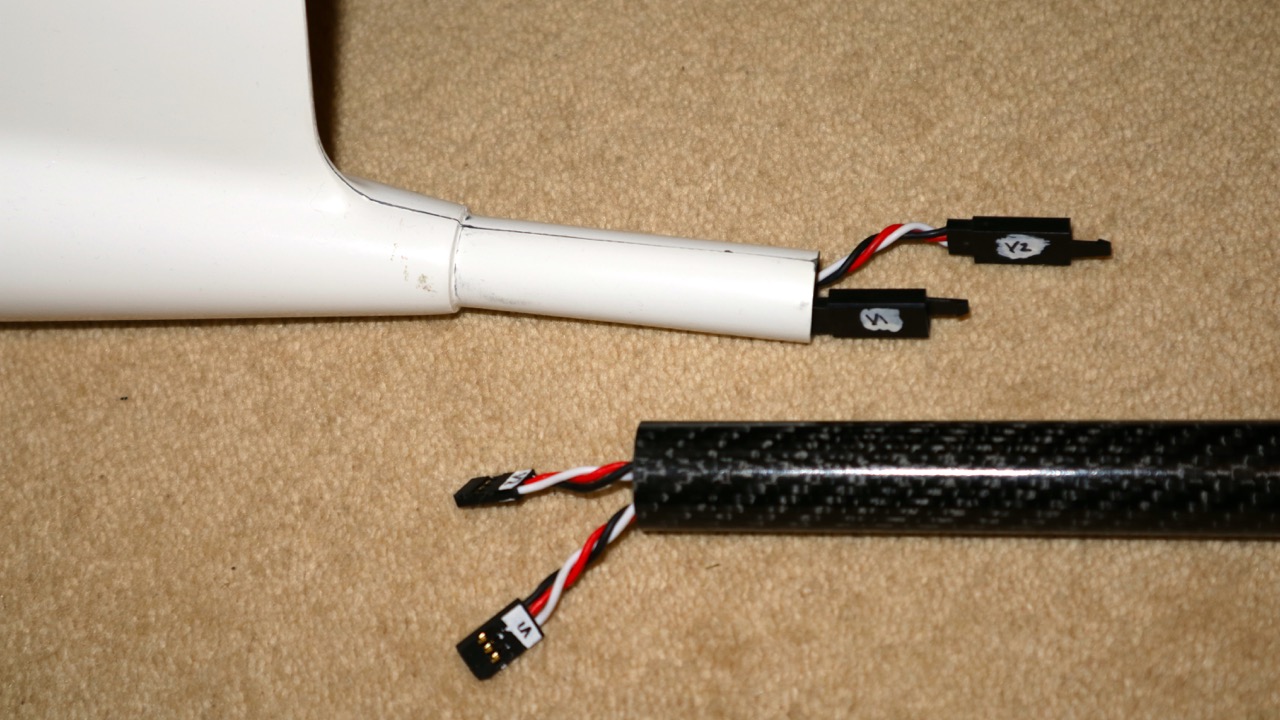 So I was finally at the stage where the flight controller had all it’s cables installed and it was just a case of connecting things to it.  The wiring looks a bit hectic, but it’s mainly because I need enough cable to easily connect to the other cables that will come in from the wings.  Happily, there’s plenty of space in the canopy to hide these all away.

I could finally turn my attention to the wings.  What I wanted to do after the last update was install the last of the servos for the flaps, but hold on, because we’re still not quite there yet.  The flap servos are going to have to be the very last things to install because everything else in the wing will need to run it’s cabling through the servo bay as well.  In the wing that housed the VTX, this wasn’t too much to think about, we had the servo for the aileron extension, and power and signal wires to the VTX.  I installed these, which required extending wires once againa and made a hole in the VTX bay cover so I could install or remove the antenna.

The other wing was a little busier as it housed the receiver.  Although the receiver didn’t control that many servos directly, it still needed 5 servo leads going into it.  SBUS, 1 for each flap, a servo for the camera pan, and finally the 5v power which was coming in from the ESC. 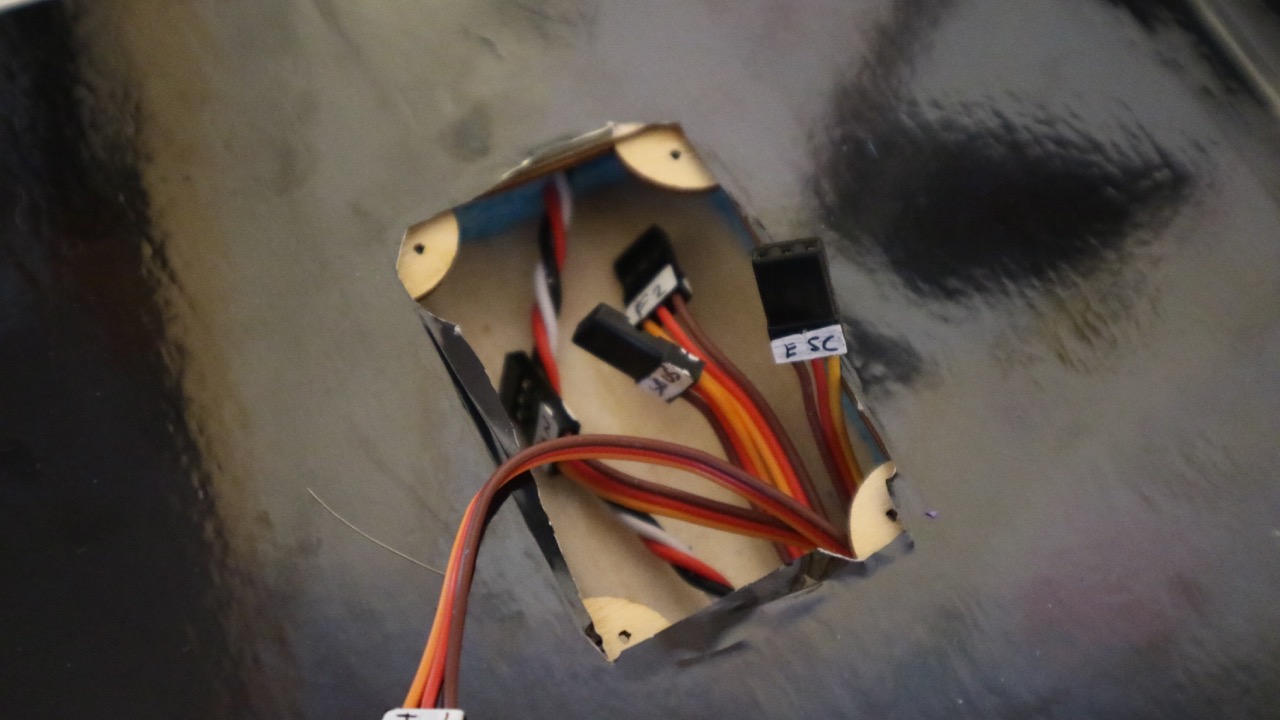 I wasn’t sure how many channels I was going to need via SBUS.  Previously in my testing I’d relied on having channels 1-6 via SBUS and then used 7 & 8 for flaps and pan.  But having decided not to use a Y-cable for the flaps, I rebound my FrSky X8 receiver using jumpers between pins 1-2 and 3-4.  This mean that SBUS would still transmit, but the PWM channels would start at 9 and go to 16.  This gave me plenty of extra channels on SBUS and PWM channels on the receiver to spare.  It was actually quite a tight fit in the bay – so much so that I didn’t need to bother fixing it in place.  I drilled two 45 degree holes in the bay cover so I could route the antenna wires out through tubing to keep them at the optimal angle. 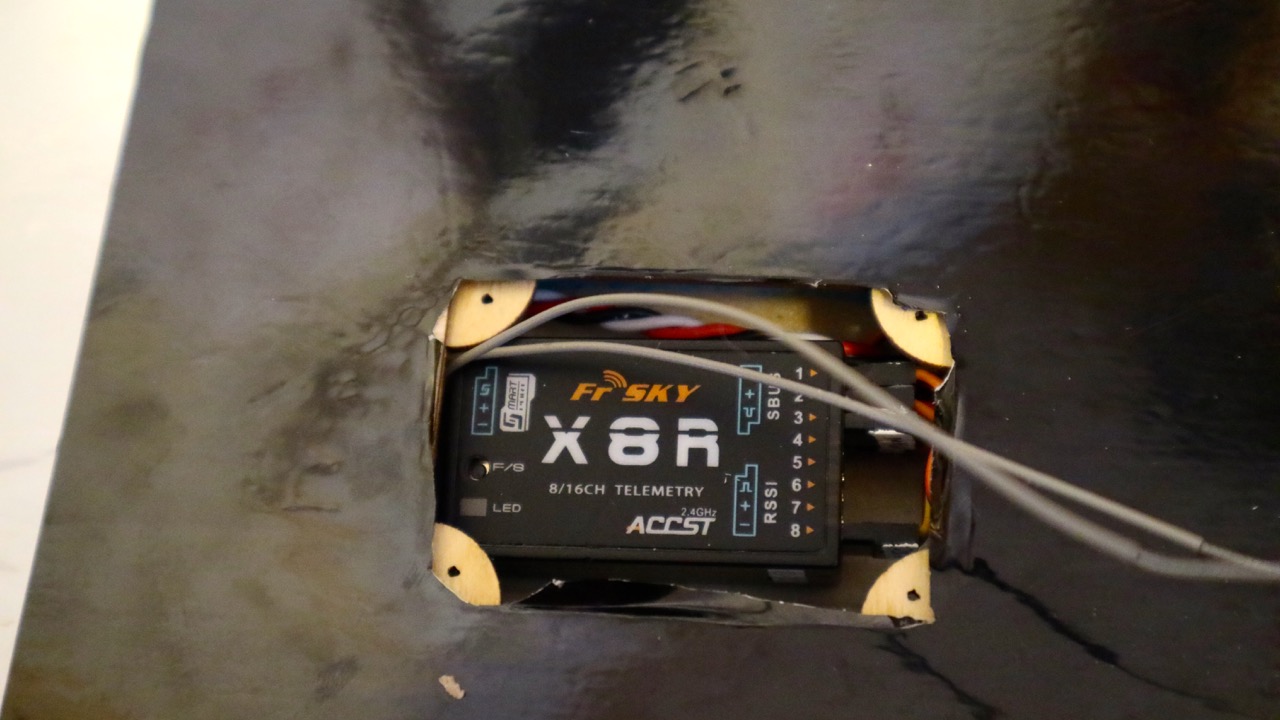 I could finally install the servos, although once again there was some trial and error here to get things right.  The servos needed their maxium throw to enable them to deploy full flaps, and I found the the 10mm high printed servo holders I’d designed didn’t quite get them high enough for the servo arm to clear the surround.   I printed at 15mm high, but then found the servo arm would catch the top of the cover – eventually settling on 12mm to get them perfectly flush. 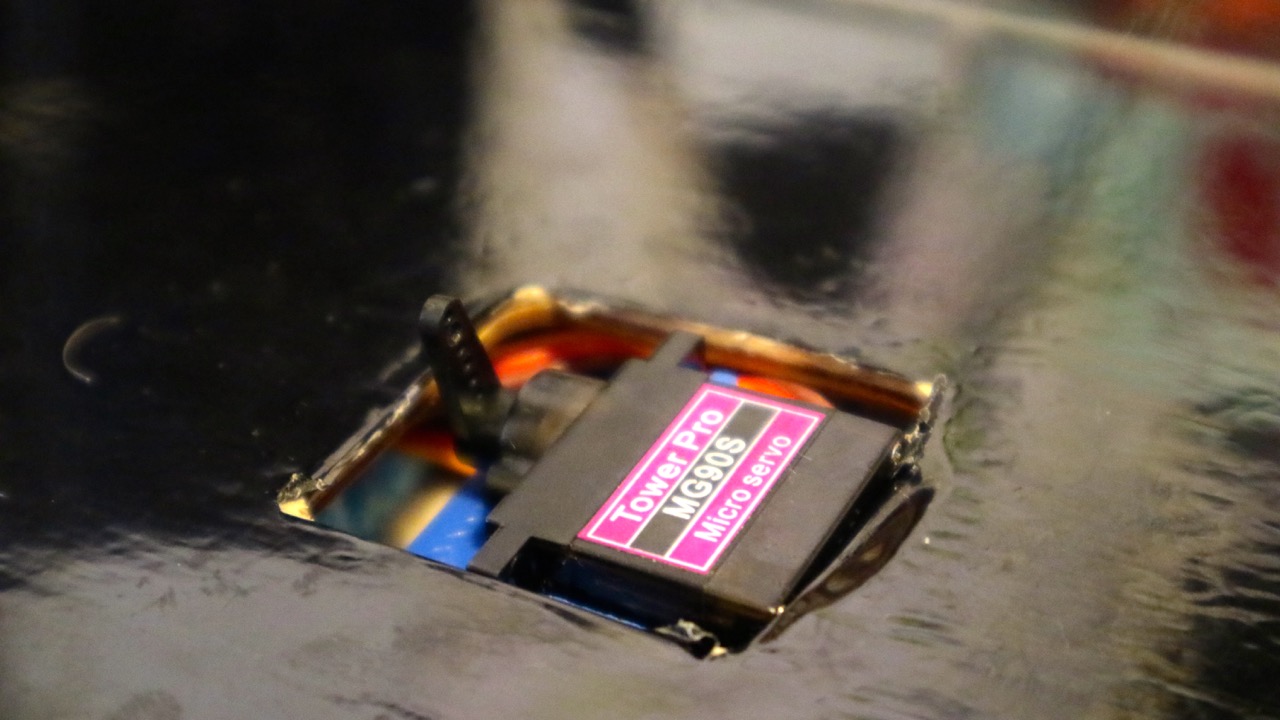 After testing the throws and the pushrod length with a servo tester, I found I needed to cut around an inch of the push rods to get things just about right.  The servos were setup so one extent is the flaps flat, and the other full deployed. 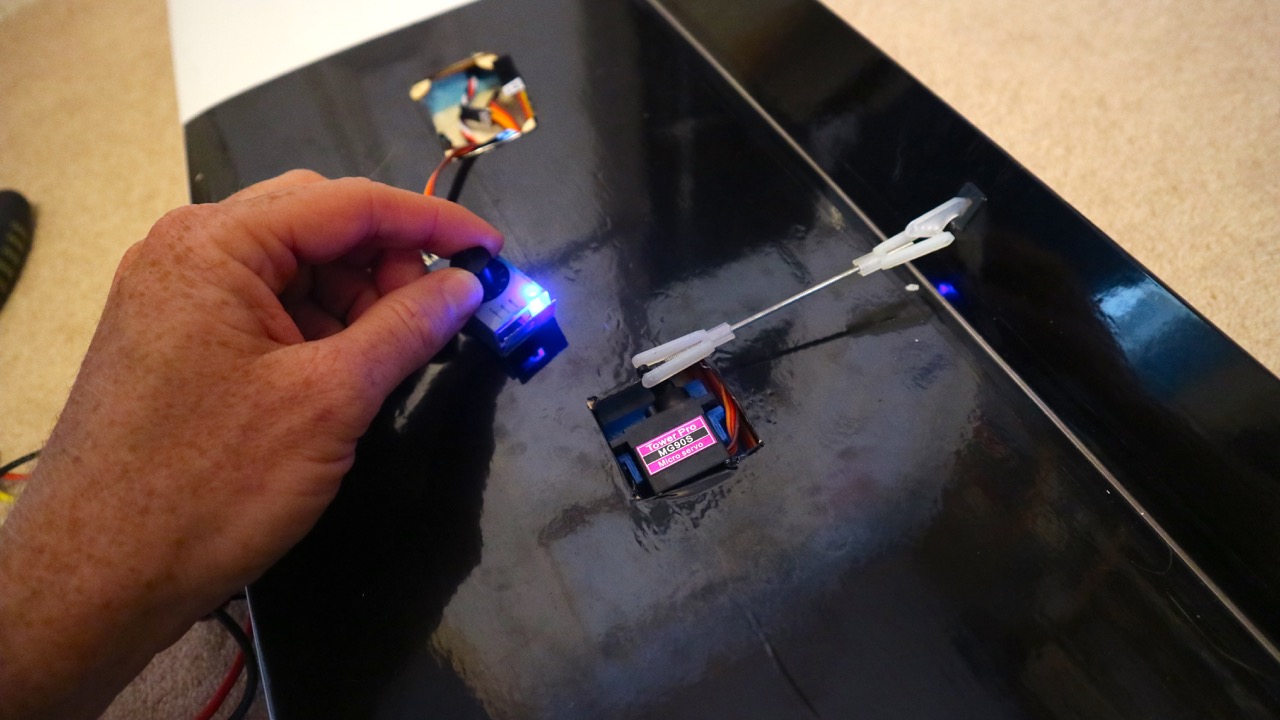 With the servo mounts epoxied into place, the VTX and RX in and the covers installed, the wings were complete, and so was most of the wiring.  This part had taken far too long, but a lot of progress was made.

In the next part I’ll (hopefully) be finishing things off.  We have the camera install and pan servo to do and I need to make design a 3D print to stop the prop folding forwards or backwards too much.  Finally, it’ll be the case of connecting everything together… and checking exactly how I stop things from coming apart – there’s no locking parts to keep the ailerons/tail/v-tail in place! 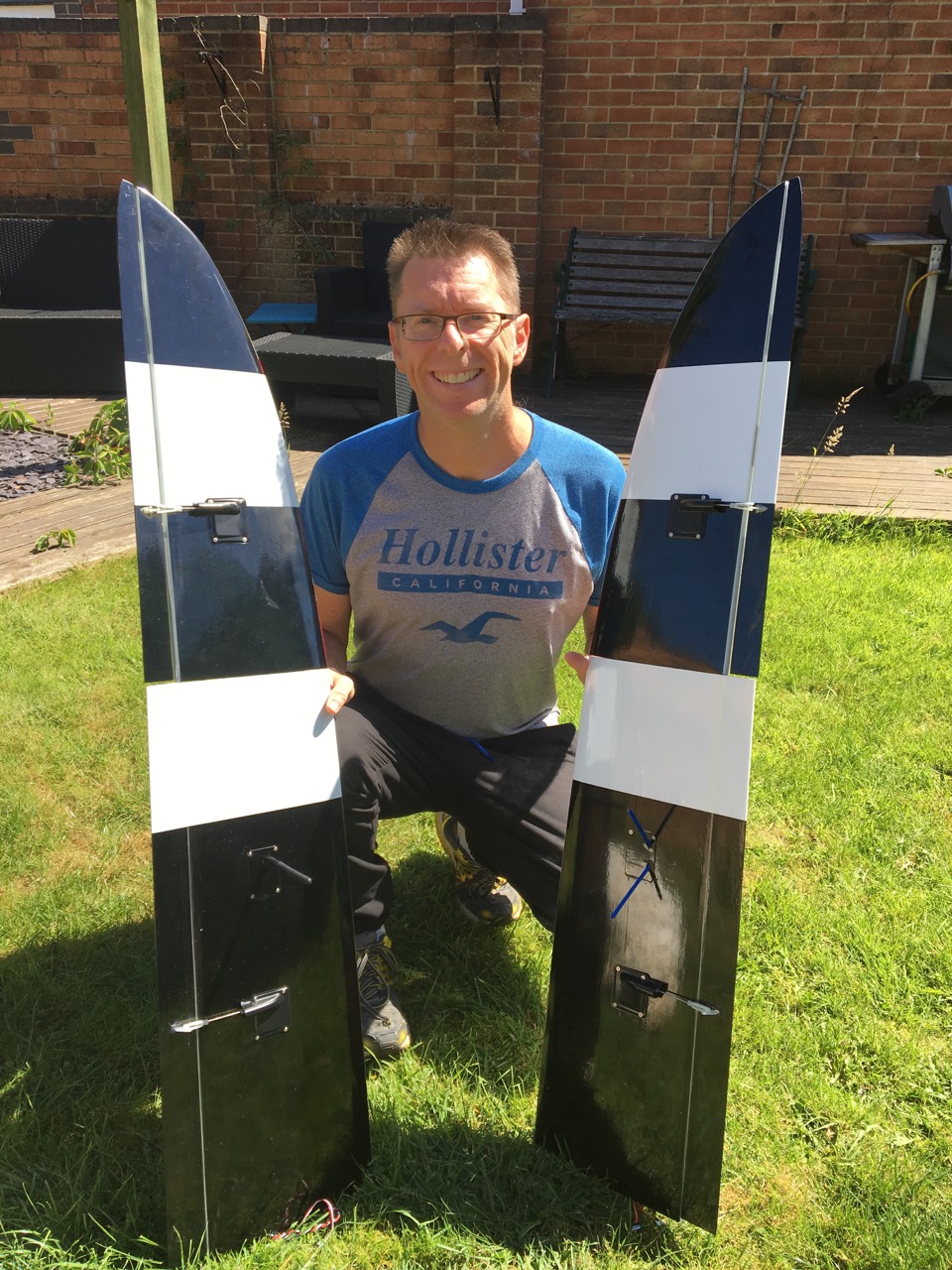